Yes a game with a live victim... having laid out some bait I enticed Simon into coming over for a game.  He thought he was coming over for a chat or a game of Shadow War: Armageddon (sorry Simon that you brought your figures all that way, next time perhaps - though we did get the chat at the end).

OK OK the truth... Simon invited himself over, hooray!  Damn there are those exclamation marks again, they seem to breed on this page... along with full stops.  I am as always very grateful to those who take the time to play games at my residence, due to the vagaries that are my life I find it difficult to get about or leave home.  Getting a home visit was wonderful and I enjoyed the company and the game, so hats off to you Simon, thank you.

Todays selection of Alien were: 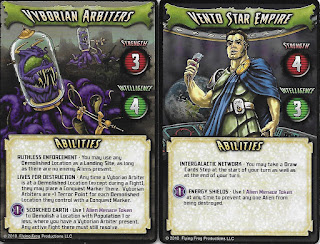 Simon had the Vyborian Arbiters, I had the Vento Star Empire, these were chosen at random.  Unlike the Solo blog post I will keep this report short and only make a few comments about the game.  There were some outrageous happenings though.

Round 4
Terror Points 5; Human Tech Track 3
Atom Bomb detonated at the Radio Station, someone sure doesn't like KIIS 106.5, thankfully I had the event card (yes it was my poor troops, 3 in total at the location) that allowed me to emergency teleport (that's how I reported it) back to the landing field.  Adding insult to injury the humans managed to acquire Advanced Super Tanks!


Turn 5
Terror Points 7; Human Tech Track 4
Ah ha, no more problems I have the device to save me Teleportation Pants!  But then the humans developed Atomic Shells...

Turn 7
Terror Points 10; Human Tech Track 7
Humans have found more Atom Bombs, clearly this species is it own worse enemy, they are hell bent on their own destruction destroying a beautiful yet harmless forest thinking it some Shakespearean play set?  Some ghostly words waft up to me...

Macbeth Act 5 Scene 3
Bring me no more reports; let them fly all:
Till Birnam wood remove to Dunsinane,
I cannot taint with fear. What's the boy Malcolm?
Was he not born of woman? The spirits that know
All mortal consequences have pronounced me thus:
'Fear not, Macbeth; no man that's born of woman
Shall e'er have power upon thee.' Then fly,
false thanes,
And mingle with the English epicures:
The mind I sway by and the heart I bear
Shall never sag with doubt nor shake with fear.
Yet again the human

Of course the atomic explosion sort of ruined the mood then.  The Alien mood soured more when the human also developed Guided Missiles, clearly a new Renaissance was happening with Guided Missiles. 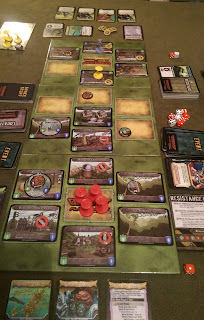 Turn 8
Terror Points 10; Human Tech Track 8
Humans acquire the event card Arms Race providing them an additional dice for the Tech Breakthrough.  At this stage rolling 4 die was not on.

Turn 9
Terror Point 16; Human Tech Track 10
Humans WIN
Wait who won, hang on... Simon made me look at the rule book, isn't that cheating by the Blind Pig rules.  Technically he is right, the Aliens won, we the Aliens score our Terror as we earn them, we got to out Terror Point level before the Humans reached the 10 Score.  Yippee the Alien Cooperative WON. (No exclamation marks this time.)


Truly a fun and enjoyable game.  Light and entertaining enough that it gave enough mathematical planning to give those who wanted to plan victory the means to do so.  A team play was challenging and as much fun as the Solo for me.  I'm now looking forward to how much damage can be inflicted with a cutthroat 4 player everyone out to get everyone game.  That will have to be a game for the Blind Pig I think.

The Hon. John
Posted by John McDonnell at 12:04 AM