Well it's been a rather quiet time these last 7 days.

I've had a running battle with Telstra over my internet connection and access.  First time I called I got the call centre in the subcontinent, where they were having a party in the background.  While the support person apologised for the noise, he kept "blacking out" his voice/background.  It really was extremely unprofessional, and I told him in no uncertain terms what I thought of the whole matter.

So come Monday (I think) Telstra actually rang me to tell me there was an outage and that they were working on it.  As such they cancelled my scheduled technician.  Wednesday still not service.  Rang and abused them in my sartorial splendour, not that that got me anywhere.  However jiggling the connection did get me connected.  Yea, all for like 3 hours before it went down again.  Decided I'd go and find a cable modem.  Sorry only Telstra can issue one, we don't have in the Telstra stores.

As of yesterday (Thursday) I seem to be online with only marginal speed problems.  Today (Friday) I had Telstra phone me telling me that the outage was still a problem and that they are working on it.  However did I have access.  I said yes, and they said thank you, and hung up.  Hmmmm???

So at least for the moment I have internet, which is why I can now blog!

The other issue facing me for the week has been a lack of vehicle.  My brakes were grinding metal and the car was desperately in need of a service.  $600 (Australian) later I am mobile again.  I enjoyed my five days, but the family did not.  They had to take public transport and shock horror, pay for taxi's where needed.  Now that the car is running it's back to business as usual with me having to go where I'm told whenever I'm told.  Sigh....

Tomorrow is the second last Blind Pig for the year.  This time of the year, which incorporates Christmas and New Year are one of the worse times of the year for me.  Social oblivion, and isolation push me close to the edge.  I'm hoping that at least volunteering two days a week will take the edge of my madness.  Pity the madness all resides at home, which I can't escape.

So gaming tomorrow.  I picked up the latest Thunderstone Advanced game: Numenera, which I shall be keen to test drive with some friends. 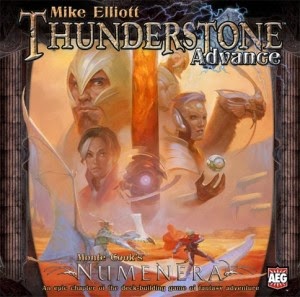 http://www.alderac.com/thunderstone/numenera/
I also acquired Quarriors which I saw played at the club and piqued my interest. 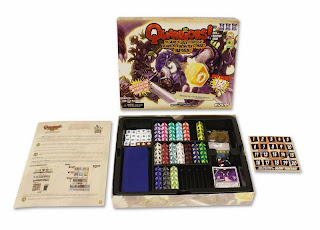 So that's it for the moment.  Catch you all next time.
Posted by John McDonnell at 11:55 PM No comments:

In and out, mucking about.  Need to focus,  Here's the work in progress JD figures painted.  Don't like the yellow, will have to do something about that.  Just the quality of the figures are letting me down. 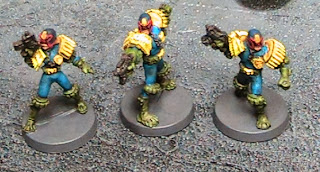 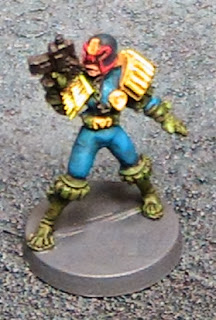 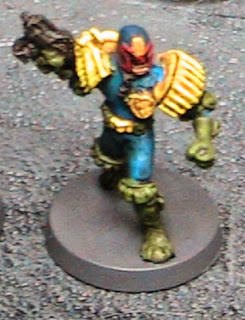 Posted by John McDonnell at 9:15 PM No comments:

SO my dilemma has been finding a painting guide for JD. 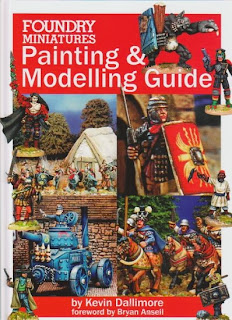 This is an excellent book.  Mr Dallimore and I share common ground in painting techniques, of course he is the better painter!

Of now to paint some Judges!
Posted by John McDonnell at 12:22 AM No comments:

A Tiger! In Africa?

I have always found that I need someone to share a passion similar to mine to get me motivated and moving.  Apathy is my worse companion, being ill generally means that my morbid thoughts tend to stop me from enjoying my favourite hobby.

So Owen E has enthused me to find my Darkest Africa range of figures.  Owen seems keen on Boers, which I seem to have just a few of.  Still plenty of unpainted stuff, but we will see where I go with other tasks for starters. 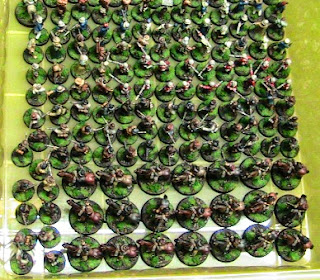 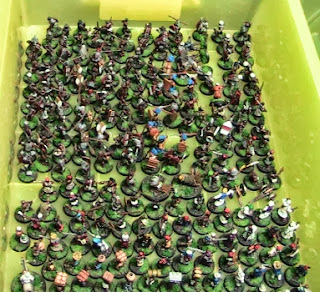 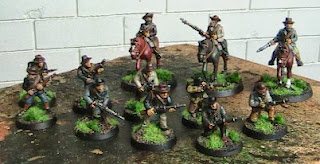 Again, sorry for the quality of the shots.
Posted by John McDonnell at 2:08 PM No comments:

So part one what does it entail?  Well I guess it is opening the blisters and preparing the figures.
I know remember why Mongoose have never really been high on my list of figure makers.  Their quality control is, or must be, non-existent.  (I was given some Star Fleet Battles figures made by Mongoose, they were resin and they were a nightmare.)

A lot of filing, some cursing when I got to the Tek-Judge, his right hand is almost non-existent.  Not sure where glove or device begins or ends.

Part of this process was locating all my JD material for painting reference.  I been collecting JD through 2000AD since the magazine first started (that's right Issue 1 onwards).  Stopped when the comic (2000AD) became too dark for my liking.  Bring back those halcyon days of the 70's please.  Oh dear I digressed again.  So I went looking, apart from some covers all my reference material is in black and white!

So for the next few hours I will be trolling the internet to try and find reference material so I can paint my lads and lassies.  Should be fun, as long as I don't start reading the comics and forget about what I am supposed to be doing.

Posted by John McDonnell at 1:50 AM No comments:

For some time now I've had some Judge Dredd miniatures that I've been thinking of using in Necromunda as Arbites.  Not long ago (or it could have been, time is meaningless to an immortal) I picked up the Judge Dredd Miniature Rules by Mongoose.  They were are the time a free download, or I may have purchased them.

However being the weak willed individual, and the fact that at this stage I don't have to paint a lot of them (I only have 15 figures), I may very well crack open the blisters and start painting. 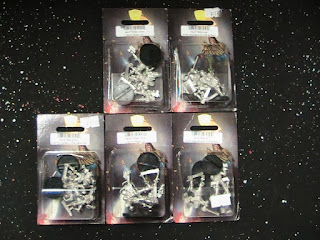 Posted by John McDonnell at 1:08 AM No comments:

I has been commented upon that I've found my spark again.  Not sure if that is the case or just a hiccup in the system.

Here in Brisbane (Australia) it is Spring, although I think we have just jumped into Summer.  Bushfires down south (New South Wales) and a worry of extreme weather again this season.

So back to Spring Cleaning.  I went to my local club the Blind Pig last Saturday.  As always it is one of the few days and events that can turn my morbid humour to one of at least increased contentedness.  I got all enthused after playing Super Dungeon Explore (thanks to Simon M, James GG, John R and Tim W [the man you came back to life four times]) I considered painting up my SDE figures.  I'll see if I can find a link or post pictures of the figures James GG did for his set, honestly they are awesome.  He's a far better painter than I, and his work speaks of his passion.  Digressing again (sorry people, I've downed 12 Strongbow to kill the pain and I guess it's showing).  So I was going to paint them until I saw the amount of putty work I'd have to do to fill in the gaps on the figures.  The figures are nice, but this was the first release figures they did (ie many many pieces to make a model). So I gave it up as a bad idea.

Back to Spring Cleaning again.  Invited Owen E to come visit.  I said I had a 55l tub of 15mm DBA style figures that I'd never do anything with (at this stage, may regret this in years to come, should I live that long).  Owen said he only had a small Fiat to fit the box in (ha ha it was a joke!).  In the end Owen took the whole tub home to sort through and hopefully make a heap of DBA armies from them.  He also took home some MERCs stuff and two fleets for Trafalgar (English and French).  I was going to do something for the Age of Sail, but thought it's better going to someone who can do something with it right now.  At the rate I'm going 80 may be a little too late to start the project.

What I did find and thought I'd think about pursuing was the Indian Mutiny for Hordes of the Empire a HotT or DBA style system based for colonial period.  I'm off referencing my historical texts for painting guides, then we'll see what happens.

I've decided to run my signature Uncharted Seas tournament at the beginning of the year next year.  Looks like it will be April 5.  Will have to wait and see what Paul & Bec post on the Blind Pig website and forum (WAU) to confirm.  Will have to start looking for nautical flavoured trophies.

I've been volunteering my services to the Queensland Suicide Register at the invite from Professor Diego de Leo.  Enjoying getting out of the house two days a week and away from my depressingly insane family (no they aren't that bad, it's probably me).  It is interesting work.  I guess it takes one to work in this area.  I guess also coming from a Police and "enforcement" background I'm not all that upset with the work.  Being on deaths door gives one a wonderful perspective on the world.

So my little spark has been ignited. Let's hope it becomes a raging inferno!
Posted by John McDonnell at 12:07 AM No comments:

Finished.
So that's 6 Strikers, and 2 Guards. All I need for the Veer-Myn team. Looking at the left over humans from Starship Troopers and thinking they'd make a decent team. Might have enough torso left, I have 5 Tau torsos that might work.
So I think these 8 figures from concept, assembly and painted/varnished was about 6 maybe 7 hours total. Need to keep a track of just how long it takes me.
I do confess that finishing these has taken the edge of my dark mood. 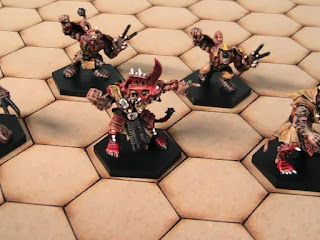 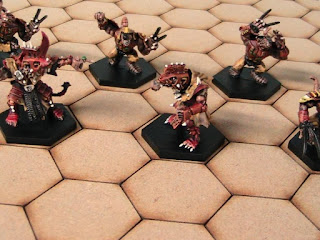 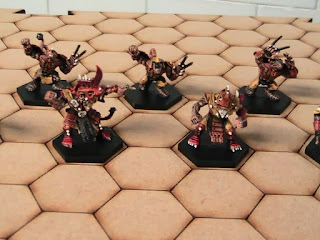 Posted by John McDonnell at 3:51 AM No comments:

So much to do and so little time to do it in.
Here are some (rather poor quality, sorry) shots of the WIP.
Almost finished.
Just 2 Guards to go. 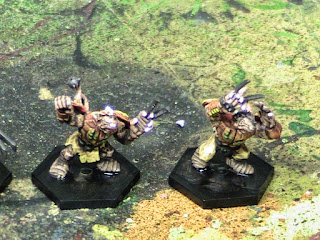 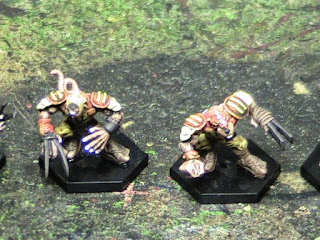 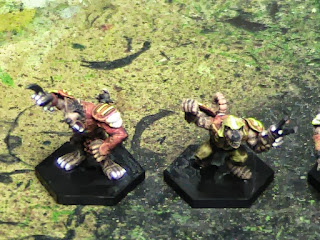 Posted by John McDonnell at 3:06 PM No comments:

As a pensioner, there is never enough money.  So I've cobbled together my own figures for the Veer-Myn for Dreadball.  Here's the work in progress. 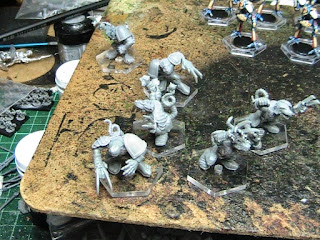 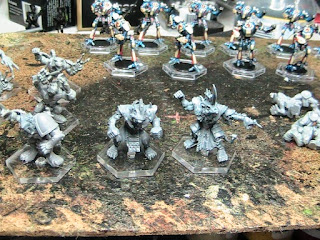 Posted by John McDonnell at 3:34 PM No comments:

So another Uncharted Seas Tournament has been sailed (run) and won.  Thank you to everyone who turned up and played.  Thank you to Bec for the wonderful work she does in making the trophies for this event. I (John McD) appreciate the support.

Everyone got a nice bag of Uncharted Seas tokens for coming.  There were some packets of figures and wind tokens as well.  Courtesy of the organiser.

I'm thinking of running the event in the first part of the year, allowing the Blind Pig to have two "trade mark" tournaments spaced out.  I'd like to hear your thoughts about whether this is a good idea.
And here's some photo's.

By the way, be careful of what Leslie takes photo's of. 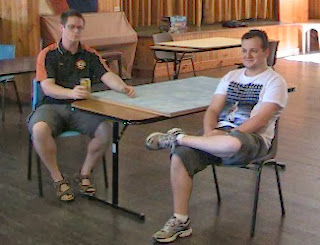 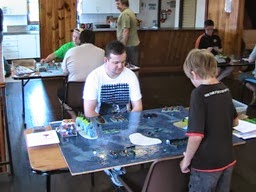 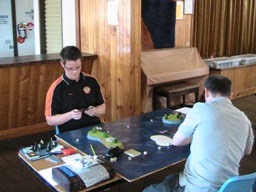 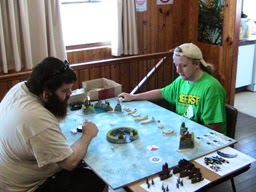 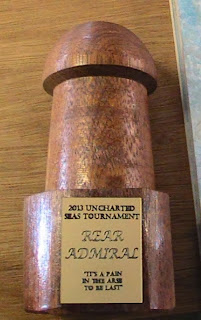