Mark got me all stirred up and I went and found the current incarnation called Squadron UK. Mark said he wanted interesting but not over powered characters. I started with the random generator and decided on a theme of a weedy chemist who develops an Elixir that grants him super-human abilities.

So here is the story as I've penned it so far.

Albert Percy was born a sickly child and was afflicted with polio in his early teens. While he was chained by his physical condition his mind was free and proved to be brilliant. Albert’s distinct advantage was with chemistry, and his ability to produce complex formulae was a marvel to his teachers. Albert finished his education at a prestigious public school and then went on to university where he continued to excel. His brilliance was noticed by the military who seconded him to work on the Super Soldier Programme. Albert’s brilliance created the seeds of future success by others. He created a serum which developed a Super Soldier, but the effect was too temporary. His first subject lasted for 30 seconds, but did achieve what the military wanted, to a point. At some point the military decided that Albert’s research had reached its zenith and after swearing him to silence, pensioned him off. It was at this point that Albert was approached by Panacea Industrial and offered the post of Head of Research and Development. It was a job that gave Albert everything he wanted, the scope to develop what he choose to and to secretly work on his serum Elixir 41. Panacea Industrial chose well and with Albert at the forefront of development, the companies’ stocks rose and their fame and fortune went in leaps and bounds. After a number of setbacks, Elixir 41 was finally perfected, but with a cost. The cost was that it was prohibitively expensive and at least one of the active ingredients was a proscribed narcotic. Elixir 41 granted Albert a herculean body for a short period of time, normally 8 hours. The transformation is agonising and Albert’s body is wracked by spasms of pain as his wasted limbs gain the muscles and his body expands to accommodate the enhanced physique. A side effect of Elixir 41 is that it is addictive. Prolonged absence of the Elixir brings on fits of seizures, mood excitement, over-activity and uninhibited behaviour, culminating in aggression or anger. Albert had to find a way to meet his secret needs. While in his enhanced form he was not recognisable as Albert Percy. His new name was Percival Hyde, and his choice of making money was as a prize fighter. Finally he was able to make the money he needed to fund his Elixir. With his fortune he was able to create the second identity of Hyde, totally separate from Percy. His fame though brought him to the attention of the Mob who controlled much of the gambling in the city. Hyde refused to take a dive and was targeted by the Mob. The hit man that was sent to eliminate Hyde got the shock of his life when his bullets bounced off Hyde. So surprised that he didn’t even register that the bullet meant to kill Hyde ricocheted of his target and fatally wounded him. In that brief encounter Albert learnt that he could control his body in ways he was not previously aware of. He found that his mobility increased so that he was faster than the average human. He developed the ability to change at will his body structure so that it became impervious to physical harm. This changing of body density also allowed him to camouflage himself so that he’s almost undetectable in shadows. Lastly was that the Elixir gave him greater vigour, enabling him to greater feats of endurance.
A typical 24 hours in the life of Albert Percy/Percival Hyde/Brasshide
06:00 Albert starts life in his role of Head of Research and Development at Panacea Industrial.
08:00 Arrive at Panacea Industrial. Checks his departments paper work and budget. Chairs a number of internal meetings.
12:00 Works in laboratory. Checking and developing existing and developing pharmaceuticals.
15:00 Withdrawal symptoms start to manifest themselves. Worsening as the afternoon wears on.
18:00 Exhausted and debilitated he is driven home to recouperate.
19:00 Albert consumes Elixir 41 and transforms into Percival Hyde. His body is invigorated and he leaves his modest flat via a secret route.
19:30 Percival Hyde arrives at his secret entrance to Hyde Mansion.
20:00 Hyde checks his schedule. Notes a number of his prize fights. Trains in his private gym.
22:00 Time scheduled for any fights.
24:00 Crime fighting time.
05:30 Returns to his life as Percy. Sleeps till alarm.

When he becomes Brasshide he dons his trenchcoat, mask and brass knuckles. He never uses firearms.

More stories as he develops.
Posted by John McDonnell at 2:09 AM No comments: 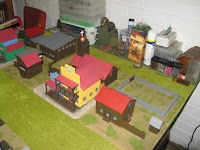 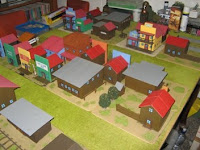 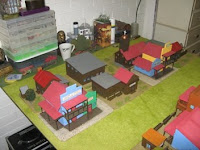 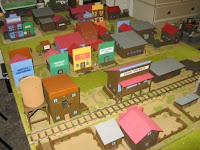 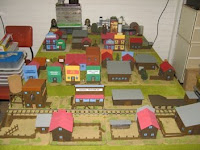 Reminds me of a pop song from the 90's (I think) by Culture Club or something like that. Sad but true. Anyway here is a Wild West Town I built many years ago when I was associated with the Warhounds (QMGC). I think I built it back in 2005 or so and parts of it have been sitting out in the dreaded shed. The dreaded shed is where I lock away those things that are too dangerous to remember. Family secrets, the past, things like that. So for me to venture into the "shed" was a big adventure. After battling the ghosts I only had to contend with reptiles and red backs. A minor inconvenience. So here are the pictures of the town. I think that I'll have to restore it a bit. It's rather sad, and pales to insignificances when compared to the work of the Master Fabricator Bec.
Posted by John McDonnell at 4:35 PM 1 comment: 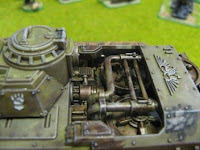 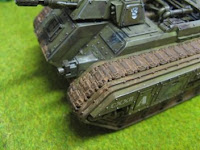 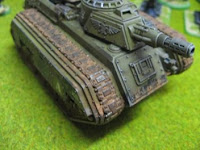 OK here are the pictures of what I've pottered around with.
Posted by John McDonnell at 7:31 PM No comments: