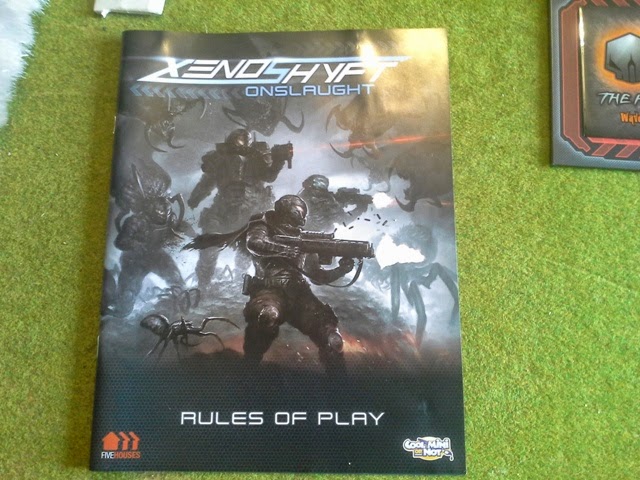 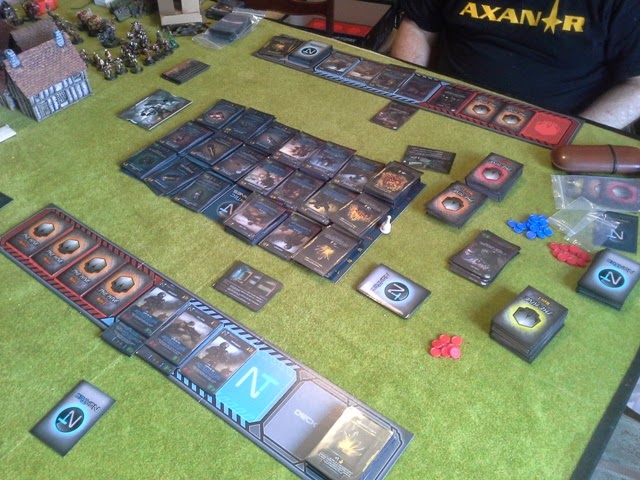 A very humid day at the club.  Slow to start but numbers picked up and we had well over 30 people attending.  The Buy Sway Sell was well attended with many happy people taking home new "toys".

Thanks of course to everyone who helped set up and pack up on the day.

Battle Fleet Gothic
Warhammer 40K
Planetfall
Wild West Exodus
Dreadball League
Infinity
A card game (all I can remember was Professor Elemental in the details) - was cool once I knew what I was doing!
Mag-Blast
Zeppelin Attack
Bang! the Dice Game
Coup

Have a safe and fun Easter and we'll catch up with you in May.
Posted by John McDonnell at 11:50 PM No comments:

Warmachine/Hordes Cryx vs Legion of Everblight

After an incredibly long time Glen and I finally got a game.  This time it was Warmachine/Hordes.


A great game to play.  I thought things were looking good from the start, but they quickly turned around.  Looking forward to another game.
Posted by John McDonnell at 10:52 PM No comments:

Thank you to the people who take the time to view my eclectic blog.

Another successful day done and dusted.
Thank you to everyone who helped out.
A great variety of games in play today.
Warmachine
Infinity
Dreadball League (a lot of activity there, good to see)
Planetfall
Epic Armageddon
Wrath of Kings (love the look of these models, game plays well)
Naval War (old card game my version 1983)
Miskatonic School Girls
Resistance
Pirate's Cove


40K (massive multiplayer point game)
Next meet is 21st March. It is also the first Buy Sell Swap day so mark it in your diary.


Posted by John McDonnell at 10:41 PM No comments:

The Blind Pig and "Successful" Clubs

Before you start reading this you need to be aware that these are my opinions.

I was asked some time back to comment about what makes the Blind Pig successful and what clubs in general can do to be successful.  I never did supply the correspondent a response, here is what I had penned at the time and now make available for all to read.

From the Blind Pig Website:
The Blind Pig began in mid 2000 when the then Manager of the Games Workshop Garden City store, Laurie Goodridge, told a group of friends sitting around the painting table causing trouble in his store, to fuck off and do something useful. The Blind Pig was born.

First located at The Mount Gravatt Showgrounds, we quickly outgrew the Budgie Hall and moved to new premises at The RSL Memorial Hall in Holland Park. After eight years at The RSL Hall, we moved in March 2011 to the larger Finnish Hall in Mount Gravatt.

The Blind Pig is an adult environment. Children are welcome, but those under 16 years of age need to be supervised at all times. Don't be surprised if your kids learn some new words and concepts at The Blind Pig.....

I have been asked why the Blind Pig continues to thrive while other clubs either struggle or fold.  I came to the Blind Pig in 2009 and have been there ever since.  The unique operation of the Blind Pig is in my opinion its success.  It is not an entity that requires an executive voted on by paid members.  The Blind Pig does not charge annual membership fees; the only cost is an admission fee on the day you attend.

The operator of the Blind Pig is supported by about six regulars who assist in the setting and packing up of the venue each meet.  There are also an irregular number of others who pitch in at times to ensure that all the terrain and tables are setup and then packed away into storage boxes and into the trailer.  Everything that is done at the Blind Pig is by volunteers who have an attachment to the club and more probably to the people who attend.

The club has a diverse system of games played, the majority of them are miniature based, but there are a number of board gamers as well.  Any game system is welcome at the club.  With the number and diversity of gaming tables in the Blind Pigs collection almost any system can be played.  Each week before the club meets a post is made on the WAU site under the Blind Pig sub-forum, asking people who wish to attend what games they intend to play, and what tables they’d like.  I have often received much positive feedback from visitors that the Blind Pig offers a greater diversity of gaming opportunities than other clubs.  The other positive is that people who play at the Blind Pig are willing to talk to strangers, a positive as it seems feedback from others is that other venues are not as polite or encouraging.

The club offers drinks and confectionary at the counter and a sausage sizzle at lunchtime.

At one stage the Blind Pig was visited on a regular basis by a business who offered his wares, many people were able to take advantage of his business and the better discounts offered.  I could not say that numbers of attendees on the day during this period were any higher than before or after.  Certainly when the business stopped attending, the Blind Pig continued without losing any momentum.

Recently one of the operators of the Blind Pig left, leaving a sole operator.  Many external sources saw this as a sign that the club would fold.  This did not happen, if anything the remaining supporters rallied around the operator and the club continues to this day.  I think that on the whole the Blind Pig attracts some 30 odd people each meet.

The club also has a growing family of children who attend with their parent(s).  These children are often referred to as the next generation who will run the Blind Pig when others get too old.

If I was to summarise a reason why the Blind Pig has lasted as long as it has I would say this:

The Blind Pig Games Club offers a variety of gaming tables of superior make that enables players to enjoy their gaming experience.  The atmosphere is friendly and inviting, with most if not all attendees functioning with amicable intentions (though this may not be apparent during a game).  There are no faction wars for control of the club, as it is a singular operation without the need of an executive voted for by members.  There are no membership fees, which encourages people who may get little free time to just come and enjoy the day rather than worry about annual fees.

The second question I was asked was for suggestions to improve the situation for those clubs struggling to maintain viability.

During my 30 years of association with many clubs I have experienced and formed opinions from those years.  I have been a member of many, but usually have been involved in the executive.

Clubs these days are almost a dying breed without the collaboration with businesses.  The biggest hurdle for many clubs is the public liability insurance needed in the event that something untoward should happen during the clubs operating hours.  Litigation is a growing trend and the threat is enough for many thinking of forming clubs to quit.  If a club can mitigate or reduce the expense then you are halfway there.

Choice of venue, its location and ease of access are crucial.  People who play miniature games will generally have a fair bit of kit to bring with them.  Car parking at the venue is crucial, as is the access to the facility.  If you have to climb many steps to access a pokey hole in the wall then many people may choose elsewhere.  Space within the venue is also of importance.  If you are cramped, there is poor air circulation, or lighting this will also deter potential attendees.   Lastly are the tables and the terrain.  It is difficult to find venues (particularly halls) where you can store tabletops or terrain.  The Blind Pig has a trailer and brings all its materials on the day.  Not every club can do this.  So other clubs need to look at how best to manage this critical resource necessary to their gaming existence.

The personalities associated with a club can be its success or downfall.  Good people and administrators will attract people, people of poor aspect and incompetent administrators will drive away others.  With all forms of social groupings people will be attracted to like minded individuals, those you are comfortable to socialise with.  This also means that many groupings will have divergent agendas and philosophy than others which can lead to hostility.  Clubs that have been running successfully suddenly fail when there is a change in executive, or dissatisfied members leave to form their own club or join another.  It is difficult to manage the personalities that make up the gaming community, how a club does this is up to individuals.

Clubs need to just concentrate on what they are good at and provide an environment that is conducive to productive activities.  Forget about what others clubs are doing, don’t worry about matching attendance numbers, or events being run or any other factor that may distract you from doing what is right for your clubs audience.  Certainly look at what others are doing, adopt practices that you think have merit, and discard those that aren't practicable.  It does not matter if your members attend other clubs, diversity should be encouraged not dissuaded.  Happy members will spread the word (as will dissatisfied ones, so it is a two edged sword), you may see numbers increase.  Today it should be about having fun more than a game of numbers.  As long as you are able to meet the cost of running the club, who cares about trivial matters of ego?

Posted by John McDonnell at 11:29 PM No comments: