For more years than I can remember my faithful family retainer visits me and the family at Christmas.  I look forward to rumballs (that are so OP that I can't drive after eating more than one) and pudding (though this year it was a tart).  So to my "old china plate" Sir Anthony Richards, thank you.  The food will be consumed (hopefully only by me) and the game we will all have to play shortly. 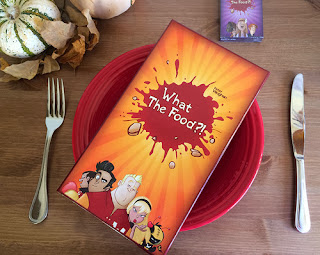 So this is the gift that Ants got for me.  He pitched in for the Kick Starter of this game, which got him all the goodies, which I also was able to benefit from.  He tells me he visited his sister and played it to the wee hours of the morning, as she wanted to keep playing it.  So that must speak well of how the game plays.  So stay tuned, I'll post something eventually about it in due course.  I will be bringing this to the first Blind Pig of 2014 to give it a whirl.
Posted by John McDonnell at 8:18 PM No comments:

So it’s almost the end of another year, and the start of a new one.

I’m still here despite an overwhelming desire to leave this world of ruin.

I sit here among all my “toys” and my mind turns to the thought “what will happen to it all when I am gone”?  Well, what will happen?  None of my family has shown any interest or passion that I have for my hobby.  Will what I have accumulated over five decades be tossed out, sold or even kept?  Who knows?  Ultimately what my family decide to do with it all is up to them, but it makes me wonder what I should be doing.

When I was young and entered the world of gaming I had more “friends” than I could poke a stick at.  I was in a unique position to have a house, a wife who actually played games (or at least pretended to) and a venue for people to come game at.  I was generous to others and thought I had the respect and friendship from others in return.  The 1980’s were not a good decade to me; my health had started to decline along with my mind.  So instead of my “friends” supporting me they deserted me, and the start of my gaming life alone began.  Where I was an active role-player I moved to miniatures where I didn't need to have a large circle of “friends”.

So the years rolled on.  I collected more from the need to feel happy, there is something in the phrase “retail therapy”.  What I accumulated became the envy of others, and led to increased loneliness.  I have been generous in my gifting over the years, but has it led to a greater enrichment of social interaction with my peers.  No it has not.  I am even lonelier now than I was when I first started to withdraw.

My compulsive nature is to see others happy.  I have the belief that if I see my actions bring enjoyment then I can through that action achieve some measure of that enjoyment in return.  The only difficulty with this is that it has brought about a “martyr” complex. This is where my actions impact on my own welfare and over time has taken their toll.  My unreal expectations that others should reciprocate in a similar fashion have harmed me immeasurably.  Yet I still do it.  Why?  I do it knowing that if my actions only get one person in many starting to genuinely appreciate what I have done, then I can feel vindicated in my actions.  I am of course always saddened that others fail to see the significance of what I do, they are ultimately nothing but the many “users” who now populate this greedy and self-centered world in which we live.

The Christmas and New Year period, along with my birthday are two critical points in time when it comes to surviving.  I volunteer work where I read police and autopsy reports of people who have killed themselves, in other words - suicide.  I have an exceedingly good idea how to end my life successfully, unlike the last three attempts.  So will I survive this crisis point?  Who knows?  I think it is really up to others to take the time to include me in their lives, to make me feel like wanting to live, that there is a purpose to seeing tomorrow.

My reason for writing this is that I really have no one to talk to.  All my genuine friends are gone, have busy lives of their own, or sadly dead.  No one asks me how I am, what am I doing, would you like to do this or that.  I seem to be like a fire alarm behind glass with instructions to only use in the case of an emergency.  Yet to be honest, even if someone were to genuinely ask me how I am, I’m sure I’d respond with “I’m still here”.
Posted by John McDonnell at 2:03 PM 3 comments:

My Dalek is not impressed with the Cricket 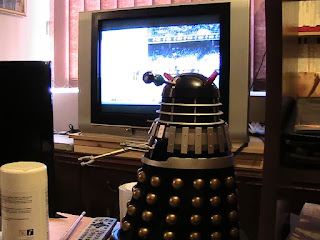 Posted by John McDonnell at 9:06 PM No comments:

Here are pictures of what I have at present.


Yes it's a really glossy sea table I have.  It's one of the two boards I have.  Generally I only use one board for my games of Uncharted Seas or Dystopian Wars.  Not sure how I will convert these ships across to Battlewagon.  Still trying to come up with a plan.

On a personal note I'm not in a good place at the moment.  My neighbour behind my property is taking me to GCAT over their demands for approx $2.5K for a new fence. This is money I don't have and most likely will never see outside of winning Lotto or living to see retirement and superannuation.  It's been extremely hard focusing on things to take my mind of the stress of this situation.  I'm not succeeding.  These are things that always happen to other people, being one of those other people puts you in another world all together.  I do not wish it on anyone.  The Christmas period is never a good time of the year for me, it and my birthday are the two danger periods to my continued existence.  Death is not an obstacle or hindrance to me.  So I guess that if I stop blogging then you may know the reason why.
Posted by John McDonnell at 11:37 PM No comments:

While "cleaning" up the Lair I stopped to look at my naval miniatures for Axis & Allies that WotC produced.

So I've dusted off the box, unpacked the ships and will see about a little seamanship!

I initially bought the ships (not so much for the A&A system) but for other wargame rules.  Namely Battlewagon from Task Force Games.  I recall playing this game back in the 80's with an old mate, I it was fun.  However bare in mind that time distorts all memory about games, so it'll be interesting to see if my recall is correct.

http://boardgamegeek.com/boardgame/3670/battlewagon
Posted by John McDonnell at 12:24 AM No comments:

The HotT EPIC Ork project is now finished (for a while at least).  Out of the mix of units I had I have managed to create 5 x 24AP lists.  Now I have the dilemma what army to have as their opponent.  The difficulty I have is that they are all painted and based for NetEPIC and I'm loathe to change them.  I'm hoping that I might pick up some painted EPIC armies in time that are excess to my actual needs and that I can "mutilate" for HotT.


Posted by John McDonnell at 11:24 PM No comments: