How the times change

My family have been involved in retail for many years, a lot of it has since the 70's been hobby related.  Below are just a few photos of the past I thought I'd share, but like my memory, a bit vague on accurate details.

When the Second World War progressed and the Japanese moved closer to Australia all women and children (and I believe non essential civilians) were sent to Brisbane or further south, commonly referred to as the Brisbane Line.  My mother and her family were no exception, my grandfather married into the family and he being of Chinese stock was not permitted to fight for Australia in the front lines, for fear at the time he would be mistaken for the enemy.  Instead he worked at Kangaroo Point ship yards maintaining the vessels that supplied Port Morsby and Papua New Guinea.

Posted by John McDonnell at 9:59 PM No comments:

As part of ennui I've been able to do nothing but shuffle about the house and the best I can manage is cataloging my extensive collections (long overdue).  Problem is as you do this you find books you've not looked at in ages, games not opened etc.  I chanced to read this editorial introduction by Scott B. Bizar penned in 1978 for Destrier.

Wow, what a statement to make, and how many people today would rip his head of, troll him and take him to task over his audacity that game systems aren't perfect.  I know that the evil empire would take exception to anyone thinking their games weren't perfect!

However I think he has a good point, no system is ever perfect.  There will always be someone who will find the typo that exploits the intent, a rules lawyer that will interpret the intent of the written over the intended.  Games for me have always been about having fun, the rules are there to allow me to determine outcomes, if my group don't like the system, we move to another or if someone is skilled enough makes changes that hopefully don't unbalance play. 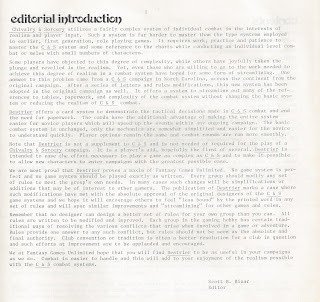 Posted by John McDonnell at 7:33 PM No comments: