A slow start today, but numbers built up to around 25 people in attendance.

Lots of games in play, noticeably with games of Warmachine/Hordes and Star Wars Armada. 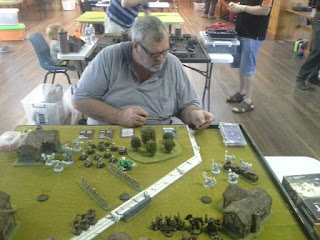 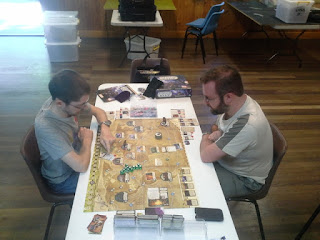 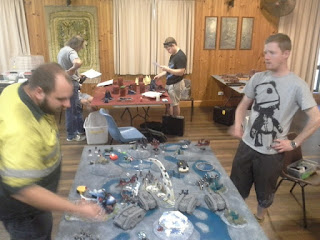 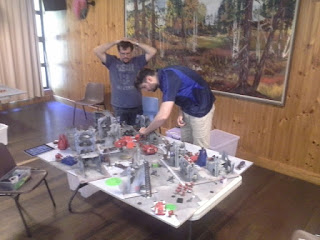 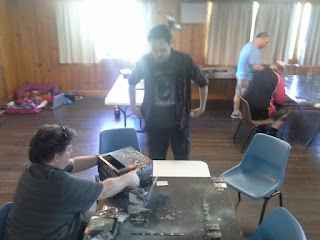 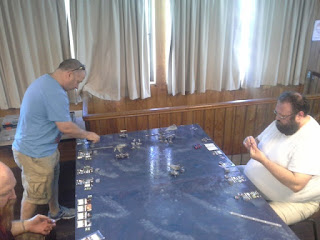 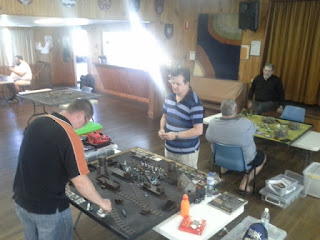 Posted by John McDonnell at 12:03 AM No comments:

I acquired some markers for my games of Warmachine on the weekend.  They paint up nicely.
I play primarily Mercenaries and Minions, so I've painted these burgundy for my Rhulics and green for my mercenaries in general.  I think they turned out rather well. 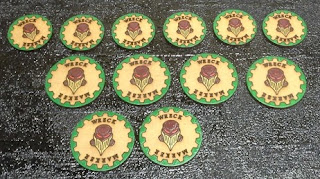 Posted by John McDonnell at 4:02 PM No comments:

The Brisbane event has been run and won.  At the time of writing this I don't have any rankings to indicate where who came where, but when I do I shall pass it on.

My involvement was with the Bling Pig, as we hosted the venue and staffed the counter, providing drinks, nibbles and lunch.  A selection of BPLaser products were also on sale.

The day from the Blind Pig perspective was Paul, Leslie and myself staffing the counter, telling stories and jokes to pass the while.  We were joined briefly by Jason with coffee for Paul, and also had the company of Tim, who spent a number of hours with us, making the time literally fly by before his missus chased him up by text and he fled in "terror" (no not really, just making that up)!

Was a long day for me, was there at 7am and got home at 6:45pm (thank goodness I'm only a few minutes away from the venue).  I think getting old has it's price...

So here are the photos from the day.  There may be some comments where I know people, but generally it will be just examples of the days event. 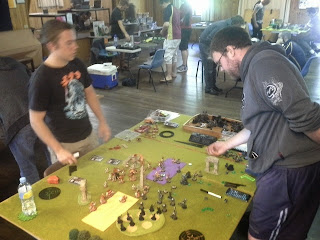 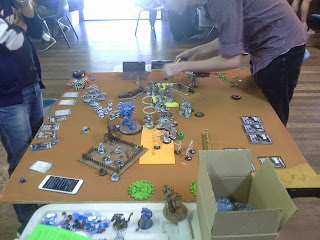 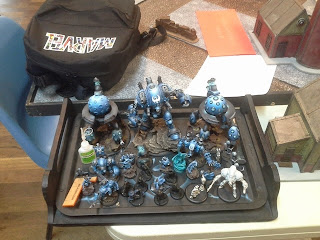 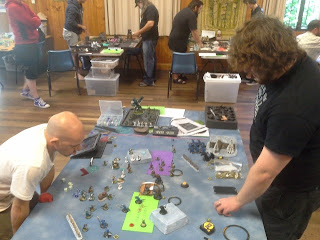 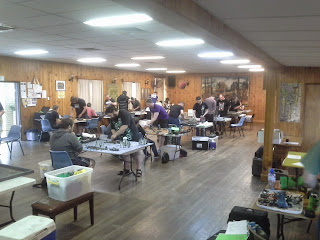 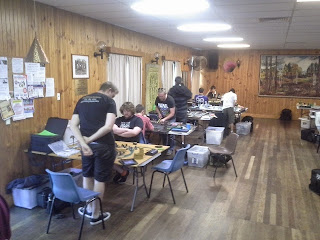 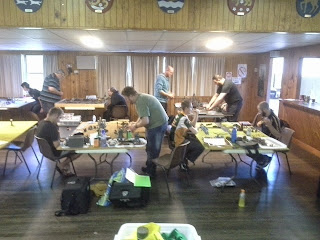 Posted by John McDonnell at 4:52 PM No comments:

Recently I picked up a copy of "The Sands of Sudan" by Carlo Pagano, a set of colonial wargames rules inspired by Peter Gilder.

Being a traditionalist, imperial colonial I love the hey day of colonial empire, when being "British" wasn't seen as being a sin and the world map showed a hell of a lot of "pink".  My school books still show those wonderful days when the world was civilised and less troubled as it is now. 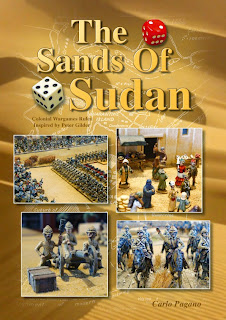 I confess to not being particularly excited with having to read rules, they always get in the way of painting figures. The rules were though a decent price, being $40AUS, which gives you a lovely glossy colour rule book, seperate card Quick Reference Sheet and a deck of 54 cards with blanks.

The rules themselves appear (from my pick a page and read style) to be simple enough that even I can understand them.  The game is essentially an umpire against a or a number of players. The event cards determine the play of the anti-colonials (mahdists is this case).  Combat while involving lots of numbers and casuality determination would appear to resolve quickly once the basics are learnt from a few games.

My enthusiasm for this game has peaked!  Then reality set in as I started to look at the number of figures I would have to purchase and paint, and that's were all good plans stop.  This game requires a lot of miniatures, the rules are specifically for 25/28mm scale though they say 15mm is possible.  I had a look at my colonial collection and found that I am lacking substantial amounts of troops and types to be able to play the game they way I'd envisage it.

So I now add another set of rules to by rules bookcase and wait for a day when my enthusiasm matches reality.
Posted by John McDonnell at 7:40 PM No comments:

As you get older, your finances change and life options become reduced, and when your favourite hobby is involved, re-purposing figures is one of the only options available.

I have a small collection of Warmaster range figures from GW.  While I have an army or two to actually play Warmaster with the few who still play the game, I wondered what to do with what was left over.  I then by accident came across Warband - Fantasy Tabletop Wargaming Rules available from Pendraken Miniatures. 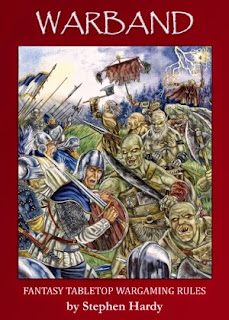 
When I get excited with a project (and that happens a lot), I get the rules, look at the army lists, decide what lists I wanted to run with, obtain figures (from multiple sources) and start painting.  Reading the rules comes usually after I've painted two opposing forces.

My efforts to this current project have resulted in one army painted. 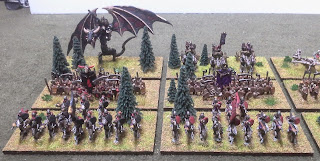 Posted by John McDonnell at 10:00 PM No comments:

How many people can claim they have written and published a novel?  Not many, how many can claim to personally know the author? Most likely even fewer.

Last Friday I received a visit from the author and given what he informed me was the second copy of his book given out.  It is a great privilege to receive this book and the visit.  I am currently reading the book at present, I had hoped to have read the book by Sunday but my health stuffed me around and I've been too tired to do anything but sleep.

I had a cryptic message from him asking him what year I was born in.  I was cryptic in return, making the response BC, which is the truth (you read it on the internet remember).  This number was the issue number he provided me for the exclusive and limited edition holograph memorabilia. 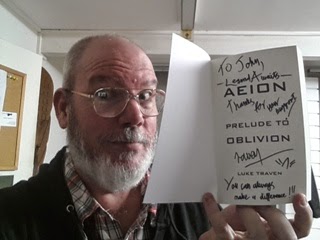 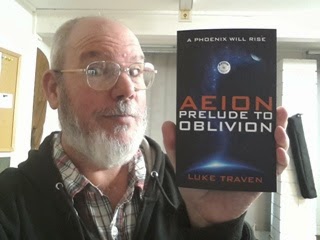 Posted by John McDonnell at 5:29 PM No comments:

Thanks again to everyone who came along and enjoyed the day.  Numbers were up with no severe weather the day before like last club meet.  There were 30 odd people enjoying a variety of games.

Next club meet is the 30th May.

There is a Warmachine tournament being run by Irresistible Force on Saturday 23rd, which the Blind Pig will be supplying the tables and terrain as well as staffing the victuals bar.

Picture of people enjoying the day.


Posted by John McDonnell at 12:31 AM No comments:

A long time ago a person I knew was keen on running a 40K style game which didn't really take off.  However it did get me to do some conversion work, one of these was my Ogre abhuman.  I think I had read a Gaunts Ghost novel which mentioned these brutes and I decided to see what I could come up with.  Then again it could have been some other inspiration, I can't remember. 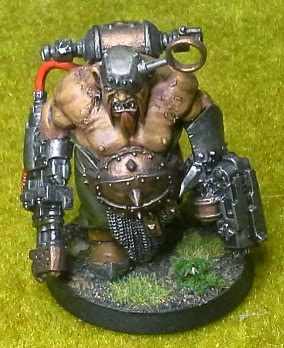 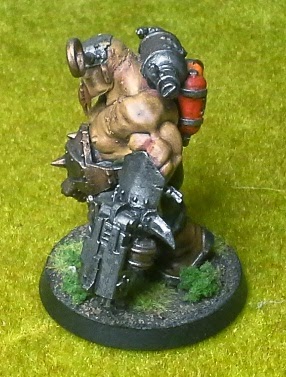 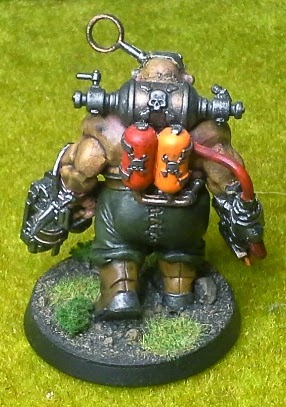 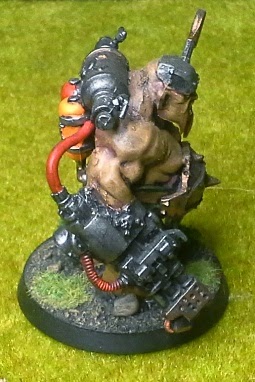 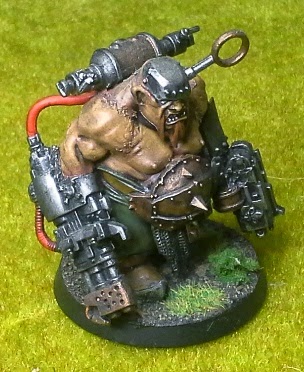 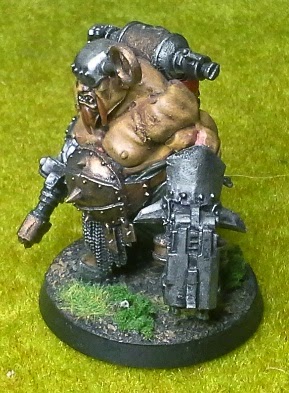 Posted by John McDonnell at 1:48 AM No comments: