Today saw a battle between the forces of the living and the dead, Elves versus Undead.

TURN ONE
UNDEAD
All the undead moved ahead except the Werewolves and Soul Reavers.  Necromancer surged his Skeleton Horde ahead 5".  The Vampire Lord surged the Zombie Horde ahead 2".  The 2 units of archer fired upon the Stormwind Cavalry and Palace Guard inflicting 1 hit on each.
Palace Guard [1]
Stormwind Cavalry [1]
Nerve tests passed by both units.

TURN ONE
ELVES
The elves adopted a shoot them with every arrow and missile we have.  The Therennian Sea Guard inflicted 8 hits, the Kindred Archers inflicted 1 hit, and the Bolt Thrower managed 2 hits.  A total of 11.  The Skeleton Horde were fired upon by the other unit of archers and inflicted no hits.
Zombie Legion [11]
Skeleton Spearmen Horde [0]

TURN TWO
UNDEAD
Undead continue their relentless advance, slow and steady wins the race, or so I have heard.
Skeleton Archers pluck away at the Palace Guard and inflict a hit.
Palace Guard [2] Pass Nerve test.
Stormwind Cavalry [1]


TURN TWO
ELVES
Both Stormwind Cavalry Regiments charge across the field.  The Therennian Sea Guard continue to unleash a volley of arrows at the Zombie Legion inflicting not one hit.  A unit of Archers however did inflict 3 hits.  The Bolt Thrower succeeded into dealing 2 hits as well. The other Kindred Archers dealt 3 hits on a Mummy Regiment. The Elven Mage ranged the Revenant King on Undead Wyrm with his Fireball and managed to inflict and impressive 4 hits on the unit.
Stormwind Cavalry Regiment charged the Soul Reaver Cavalry Troop hoping to break them, they did manage an impressive 6 hits of the unit.  The other Stormwind Cavalry Regiment engaged the Skeleton Spearmen Horde and only managed 5 hits.
Revenant King on Undead Wyrm [4]
Zombie Legion [14]
Skeleton Spearmen Horde [5]
Mummy Regiment [3]
Soul Reaver Cavalry Troop [6]

TURN THREE
UNDEAD
Undead continue to advance.The Werewolved flank the Stormwind Cavalry, while the Soul Reavers continue back into melee.  The Revenant King on Undead Wyrm flanked the other Stormwind Cavalry while the Skeleton Spear Horde pressed its attack with the Stormwind Cavalry.  The Zombie Legion surged ahead with the help of the Vampire, but not enough to engage the Therennian Sea Guard.
The Soul Reavers inflicted 5 hits and used Lifeleach (2) to remove 2 points from their Nerve total.  The Werewolves double their attackes to an impressive 36 dice, yet only managed to convert that into 7 hits.  The other side of the battlefield the other Stormwind Cavalry were not coping any better.  The Skeleton Spear Horde inflicted 5 hits, used Lifeleach (1) to recover 1 Nerve.  The Revenant King on Undead Wyrm as an individual does not benefit from the double attack rule, and managed 5 hits.(OK this is actually wrong.  The Revenant King on Undead Wyrm does not have the Individual trait, so this restriction does not apply to him.  We viewed him as a "hero" and associated the Individual with him which is not the case.) The Elves rolled low and managed a Wavering result instead of an outright rout.
Palace Guard [2]
Stormwind Cavalry Regiment [12], failed the Nerve test, no reroll available. Unit destroyed.
Stormwind Cavalry [11]

TURN FOUR
UNDEAD
The Skeleton Spearmen Horde engage the Stormwind Cavalry Regiment, inflicting 4 hits and ensuring its rout. The Revenant King engaged the Elven Mage, inflicting 2 hits, the resuling Nerve test resulted in a Wavering result. The remaining Mummy Regiment engaged the Therennian Sea Guard and inflicted 3 hits.  At the start of their move they used their Regeneration ability, but failed to recover any Nerve. Both Skeleton Archer units failed to damage the Palace Guard.  The Werewolves Horde inflicted 5 hits on the Forest Shamblers.
Palace Guard [2]

TURN FOUR
ELVES
Therennian Sea Guard engage the Mummy Regiment, inflicting 10 hits, the resulting Nerve test routed the Mummies.  The Palace Guard sensing the imminent attack from the Spearmen Horde charged ahead toward the Skeleton Archers getting them safely out of danger.  The resulting melee inflicted 2 hits on the Archers.  The two troops of Kindred Archer fired upon the Spearmen Horde adding 5 hits. The Bolt Thrower ranged the Soul Reaver Troop and inflicted 2 hits, the resulting Nerve test left them Wavering.  The Forest Shamblers engaged the Werewolves inflicting 4 hits. 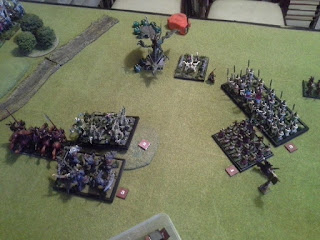 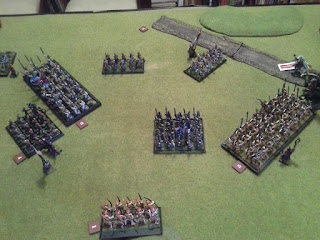 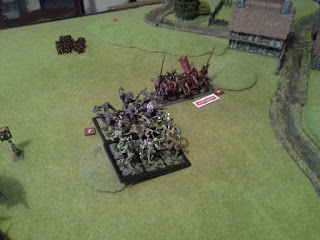 TURN FIVE
UNDEAD
The Werewolves engage the Forest Shamblers inflicting 6 hits, the Shamblers fail their Nerve Test and are routed.  Werewolves lifeleach 1. The Vampire Lord engaged the Dragon Kindred Lord inflicting 2 hits.  Both Skeleton Archers fired upon the Palace Guard totaling another 3 hits, the Guard pass their Nerve test.  The Skeleton Horde engage the Kindred Archers, inflicting 6 hits.  The Archers failed the initial Nerve test plus the one granted by the Standard Bearer.  Unit routs.  The Revenant King engages the Elven Mage, inflicting 3 hits, the Mage failed his Nerve test and routs. 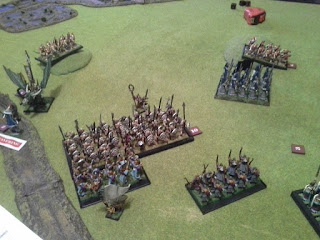 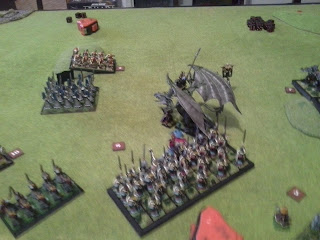 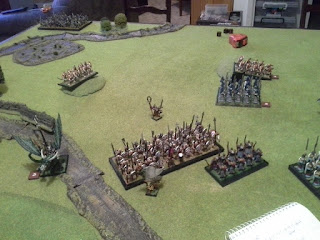 TURN FIVE
ELVES
Kindred Archers fire upon the Spearmen Horde inflicting 2 hits.  The Palace Guard engage the Skeleton Archers inflicting 4 hits, the Archers fail their Nerve test and are routed.  The Dragon Kindred Lord engages the Vampire Lord, inflicting 3 hits.  The Bolt Thrower continues to fire upon the Soul Reavers inflicting 1 hit and ensuring the continue Wavering.  The Elven Mage casts his Lightning Bolt at the Werewolves and inflicts 2 hits, causing them to Waver. 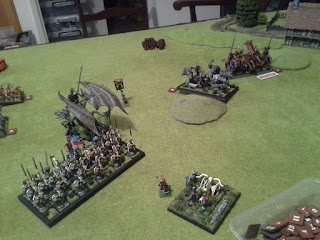 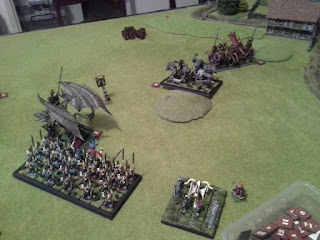 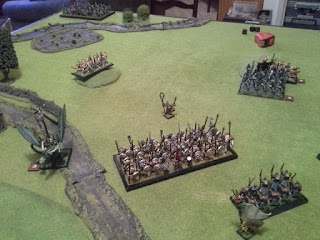 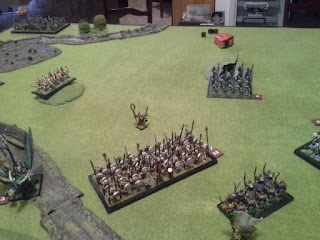 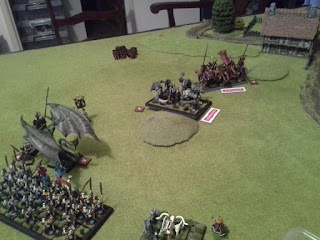 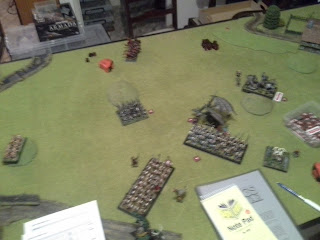 FINAL THOUGHTS
A seesaw battle similar to the first game I played.  Things that needed to be remembered, lifeleach and regeneration for the undead.  I'm not sure on the points invested in the Dragon Kindred Lord as he was pretty impotent throughout the entire battle.  Probably just not in the best strategical place at times. The Revenant King on Undead Wyrm certainly worked well.  The Undead had a Necromancer that failed to appear on the battlefield, even though his points were paid for.  This would have made a big difference as Surge (8) is better than the Vampire Lords Surge (3).  The Elves would have been in a very unhappy state had the Zombies really surged across the battlefield.  Bane Chant is extremely useful, though choosing when to use it or an alternate spell (you can only cast one spell in a turn) depends on circumstance.

The other important factor that was pointed out to me is that some units/models are not Individuals and are not subjected to the restriction on flank and rear attack bonuses.  Always check the stat line of the unit/model.

All up I am enjoying this system.  I can reuse virtually all my WFB figures.  There is no need to remove figures as casualites.  Certainly the large counters I have created make it easy to mark the Nerve rating on unts, though I need another colour for my opponent, as during the game we lost/forgot which unit had what value.

Saturday 19th September I shall be having another game at the Blind Pig.  Looking forward to it and my opponent Michael C.
Posted by John McDonnell at 9:12 PM