Cleaning up my studio has given me a small boost to do something.

While thinking of what to do I had a look through HotT, and The Stronghold Rebuilt (http://hordesofthethings.blogspot.com.au/) .  A lot of my files I had from the old Stronghold are stored on disc and I think goes back a number of years to the early 2000's.  The first list by Alan (Saunders) had the elements based for 25mm scale, which was what I was thinking of doing.  Nothing wrong with massed troops for elements.  However, practicality and an inbuilt ennui drove me to choose the least resistance.  So I've gone with the revised list from The Stronghold Rebuilt.
http://hordesofthethings.blogspot.com.au/2012/02/epic-hott.html

Here is the pictures of what is being used for the project.  Obviously lots and lots of figures, not all will be used, but who knows where my madness will lead me. 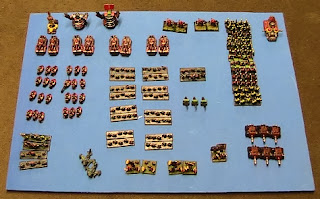