It's been a while?

Yes it has been a while since I've posted an update.

Lots has been happening. Children are just about finished school for the year. Only Dana to go and she finishes on Friday coming. Liam is already on hols and is not liking the new regime. Yes I've made a new set of rules for this year.

1. Children will only have 8 hours of access to PC/Consoles a day. 4 hours in the morning and the evening. I think that this more than enough time. My children don't think so but I have to take a stand and be the parent.

2. Children will now do chores. Laundry, rubbish detail and keeping the house clean. I know my son will be fine but my daughter is ignoring the rules. She will learn eventually. No access to Facebook will bring her around.

On the miniature front I've have a week or so of rest. Been sick. Have now recovered enough that I've gone mad. Yes mad, as if you didn't already know that.

So what have I done? I've built 8 Imperial Guard vehicles. Finished a Blood Bowl commission (Humans). Finally completed Sam's Collete Crew for Malifaux. Started to paint the Issue 2 Warheads Collection, and made the insane decision to build my 1/72 scale WWII army.

I've taken an interest again in my Empire of the Petal Throne and am keen to start roleplaying again. Assuming I can find persons mature enough to play the world the way it is meant to be.

Got Luke Aquan's to finish. Really like the new finish. Will have to get back into this game, but there is just so much out there that tempts me.

Well that's it from the Mad One.

John
Posted by John McDonnell at 12:32 AM No comments: 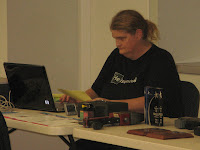 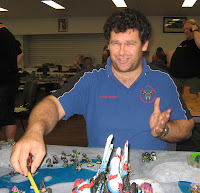 Above are some photo's I took on the day.

Here are the results of the day.

Gack. Sick as a dog. World is looking really weird at present.

I may be irritable, decidely abrupt and unpleasant but I continue to soldier on. As a result the paint has been flying thick and thicker! Polished off my AI aircraft. Got my order from that champion chap Luke from the Phoenix Forge. Lots of new goodies to keep my mind off the pain.

Incoming today was my latest Malifaux figures. Even lucked out and got the Miss Pack (Nurse) in my Dreamer Boxed set. As part of my order was the latest Thanaris Elves and Iron Dwarf ships. I also got the new Sky Pirates Sabre Class Attack Airship.

My wife attended the school last night to hear about the new laptops the children will be getting for 2011. My youngest (Dana) will get one but Liam will miss out on this. I have to read through the contract details etc but from what my wife tells me is that we get to keep the laptop at the end of the four years. Mind you 4 years is a long time in the technology sector so the machine will be more than likely obsolete then. However I'm not one to pass up a "freebe". Mind you I still have my last three pc's still sitting on my shelves. I really must do something about getting the data off them one day.

So life continues on. Till next time, remember life is as long as you want it to be.

john
Posted by John McDonnell at 10:49 PM No comments:

The 2nd last Blind Pig meet last Saturday. Only one more for the year. I think the lads and I will have to make some arrangments to get our gaming fix over the christmas break.

Anyway the Saturday Pig was great. Got to have two excellent games of Aeronautica Imperialis with Pat, almost got a third but Luke turned up. Sorry Michael, I'll have to have a bash against your Chaos next time. That Harbinger was just huge. I must say that I am finding AI to be a great little game. There are only about 5-6 pages of rules, and apart from that you only need the data sheet for the aircraft. I'm hooked. The nice thing is I really don't need a lot of aircraft (but when has that stopped me from being insane) to play. I just wish my best friend Shane was still alive, he'd have loved the game. I could have seen him tinkering with the game, adding more details and making a simple game epic.

After the games of AI I then played Luke (from Phoenix Forge, he made a secret visit) a game of War Rocket. Here is again a great little game that has value for money. Looking forward to more of this as the company expand the range.

Tomorrow night I'm making time for a game of Napoleonics with my mate Andrew.

Well that's all for the moment.

Remember - games are fun, enough yourself.

John
Posted by John McDonnell at 11:05 PM No comments: