To all my clients

Just a short note to all my clients.

With the weather being the way it is at present I'm swamped. Yes it's a bad pun. Until I can stop worrying about water levels in my house I'm taking a break from painting. I hope that you understand these circumstances and accept the delays.

John
Posted by John McDonnell at 2:10 PM No comments:

Well I'm constantly bailing water at present. There is just so much water, the fact is I'm at the bottom of a hill, across the street from a creek and the ground is so water logged. The water is literally oozing up through the concrete floor and through the walls of my downstairs accommodation.

Thankfully I only suffer about 1cm worth of ground cover across the level.

My heart goes out to people in Queensland who have suffered worse. I'm shattered with just the psychological damage of worry and depression over what I'm suffering. I know that it will be worse for people who have lost everything. I hope that the Government does the right thing and help those who loose everything.

So I'm preparing for another deluge in the next day or two, hoping that I can mitigate the worse, but preparing for the inevitable.
Posted by John McDonnell at 2:01 PM No comments:

I really am becoming a sucker for the "pulp" genre. While I was in JB-HiFi today I spotted The Green Hornet. Sensational titling "15 All New Exciting Chapters", circa 1940's.

I even get two radio episodes, always good value in my book.

Must get back off Luke my B&W Flash Gordon serial, so if you read this Luke you will know why.
Posted by John McDonnell at 5:16 PM No comments:

Here is a list of books that I'm after. If you help me out let me know.

As the title said.

I'm tired of everything at the moment.
Posted by John McDonnell at 3:47 PM No comments: 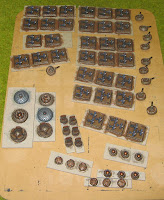 Posted by John McDonnell at 5:16 PM No comments:

What I have planned for this year 2011

Just where do I start. There is just so much out there that I want. It's terrible!

So having seen that Mark has made a pledge about his painting aspirations I thought I'd have a small think about what I intend to do for this year.

Projects that I will work on (note that I don't use the word start or finish):
The Great War - British and German, late war.
Colonial Conquests - Colonial British versus the uncivilised. I have Zulu's at present but want to consider Mhadists and Indian Mutiny (which is just a bit earlier that Victorian Colonial conquests).
Anima Tactics - I'll pick away at these. I'm actually painting some of these at present to break up the workload of commissions.
Urban War - Another skirmish system.
Warzone - I'm actually going to go back to this system and pick up where I left off. I'm even thinking of dropping the old figures into the stripper and redo them. God my old style of painting sucked.
Hordes - Trollbloods and Circle I think, but only a small selection rather than going the whole hog and getting the lot.
Warheads - I'll continue to collect and paint these. I love the miniatures and the humour really appeals to me.
War Rocket - I need opponent ships for my single fleet, so I'll pick up the Saucer chaps in due course.
Kings of War - thankfully my WFB armies transfer across and I'll just pick up a few of the warmachine and possible the Khaos Dwarves when they come out.
Aeronautica Imperialis - I must get some Imperial ships to fight my Eldar.
Malifaux - Will continue to collect what comes out.
Uncharted Seas - Just my Thanaris Elves and Iron Dwarves.
Dystopian Wars - As much as I can get.

Hmmmm----- there seems to be quite a lot that's going to happen this year. I'm still thinking my WWII and Moderns.

On top of that I still have my commissions to do.

I'll be running a few tournaments this year.

The only thing that will hold me up is my health. At present I'm not well. My doctors don't come back from hols until Tuesday, but I think I can hold on till then. After that, who knows. I confess that this year is going to be a difficult one for me. The pain is really starting to affect my ability to focus, and where my painting has previously helped me cope, it's not working at present. So doctor's next week, and the rest is in the lap of fate...

John
Posted by John McDonnell at 10:36 PM No comments: