See the previous post re my first play of Runebound 2nd Edition.  There were lessons to be learnt, i.e. I read the rules.  Yes I picked up on a number of things that were done wrong, quite a few, but in the end as long as we were consistent with our errors and had fun did it really matter! 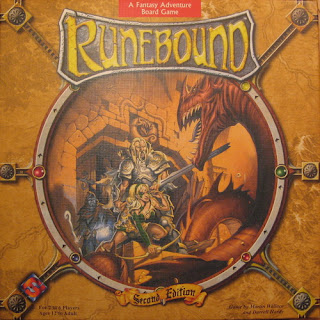 I decided I like Red Scorpion, the state line was good (in my opinion across the entire spectrum), I'd played her in the last game and wanted to see how she fared in the solo.  So here we go. 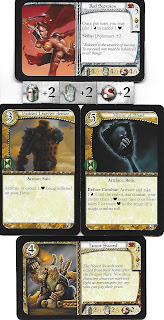 Above the the lady of action at her peak before she ran afoul of the Brood of the Blood Mother and lost everything, the armour game later, I just included it just to reflect how cool she would have been had things not ended the way they did. 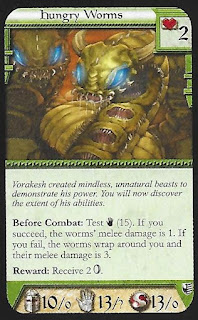 Red Scorpion won, but was wounded.  The thing we did not pick up on in our previous game was that when wounded or exhausted you only roll 4 die when rolling to move.  Big difference that would have made, but I know now and in future games.
Using the solo rules from BoardGameGeek which introduces a Step 6 (now it did take me a while to get my head around Terror level, Terror Difficulty, Doom tokens pool etc, but I think I got it right in the end... I hope).  I rolled a 16 added 1 for the Doom token that had appeared, which resulted in 17.  A result less that the difficulty level of 20 (which I was starting on for new players) and the result was +1 Doom token added to the play board.  They say pool, which I am assuming means the map board, i.e. in play.
End of Turn: Terror Track 0; Doom 2 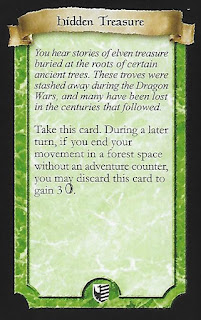 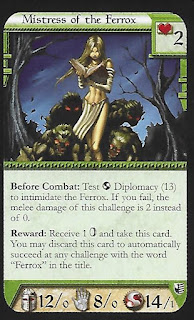 A double whammy.  First card drawn was harmless enough thankfully, some money down the track for when I needed it.  Next was the Mistress of the Ferrox.  Sadly Red Scorpion was proving not as agile or diplomatic as she should have been and failed the test, which meant I had to win any melee or I'd be taking 2 instead of the 0 as listed above.  In the end I won the combat though the damage was creeping up on my character, I'd have to visit a town soon.  The card was a keeper which meant that it did not go onto the track and trigger a Doom token placement.  However I still had to play Step 6.  Roll: 11 + 2 Doom = 13 less than 20 = + 1 Doom token to play.
End of Turn: Terror Track 0; Doom 3


Turn 3
Dashed into Tamalir and drew a card as the first action - Shield of Light one gold short damn. It was the only item I could buy (Tamalir being the starting city), Hire and Ally was not an option, Sell and Item - I wish, Buy Healing - yes please, which I did 2 gold to heal two wounds.
Step 6: 18 + 3 Doom = 21 more than 20 = +1 Threat Level remove all Doom tokens
End of Turn: Terror Track 1; Doom 0 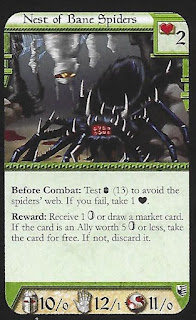 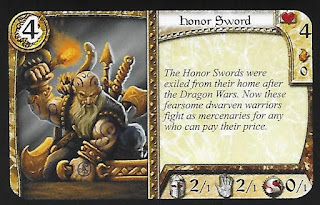 Found a Nest of Bane Spiders and have come to the conclusion that I am not the best when it comes to testing for Before Combat tests.  Failed this one BUT Red Scorpion allowed me to use 1 fatigue to avoid 1 wound which I chose to use.  I live for the moment!
I fought my way through, I won I took the chance and was rewarded - yes I really was for those who may think as people do of those who play solo games (he cheated what are the odds of that happening), I drew an honor Sword Ally worth the 5 gold or less who joined me - yea!
Step 6: 19 + 1 Doom = 20 = +1 Threat level remove all Doom tokens
End of Turn: Terror Track 2; Doom 0 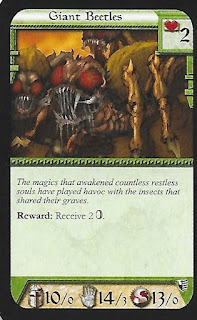 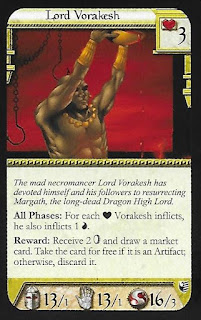 Defeated Lord Vorakesh.  Recieved the reward was not successful in obtaining an Artifact from the market, lightning does not strike twice in the same place...  Doom token placed.
Step 6: 16 + 1 Doom = 17 = +1 Doom Token
End of Turn: Terror Track 2; Doom 2 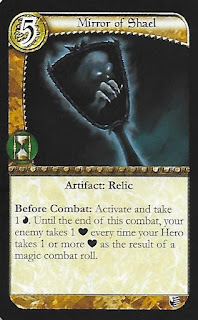 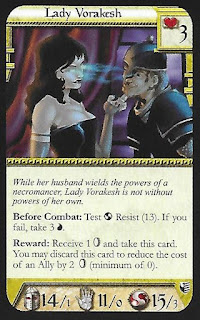 The Artifact I purchased in the turn before came in very handy, allowing me to survive this encounter - just.  The way I worked the combat, winning the Mind, the ally winning the Body, and yes I did loose the Spirit taking 3 damage but with my ability I only lost 2 wounds, inflicted 1 from the artifact onto Lady Vorakesh and thus defeated her.  Gained 1 Gold and kept the card, a bonus.  The experience earned allowed me to gain +2 to Body attribute.
Step 6: 11 + 0 = 11 = +1 Doom token
End of Turn: Terror Track 3; Doom 1 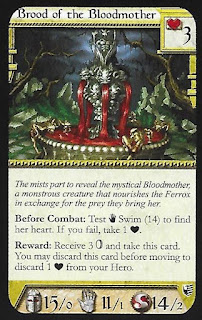 Yet again I failed a Before Combat test - can't swim this time, was this a taste of things to come?  I had become too cocky with my ability to fight my way of danger and it all came back to get me.  In the end I lost.  So what happens when you lose?  Well I discard all my wound and exhaustion counters - yea!  Discard all my gold to the bank - boo! Discard my highest cost Ally or Item, well there went the Artifact, damn it!  Move to the nearest town - Frostgate.  Undefeated challenge encounter stays awaiting me to return - not bloody likely...
Step 6: 14 + 1 = 15 = + 1 Doom token
End of Turn: Terror Track 3, Doom 2 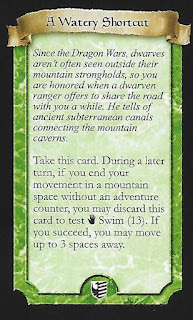 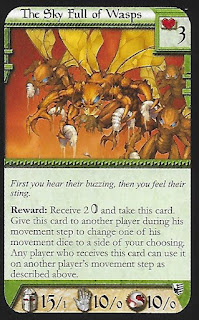 A fresh start, a least my stats had not been stripped and while I had lost my nice shiny artifact my loyal Ally was still with me.  I shall rename him Cannon Fodder.
A Watery Shortcut will more than likely be a watery grave for me seeing I can't make my tests these days.  However I did win the battle with the wasps, and took my 2 gold.
Step 6: 12 + 2 = 14 = + 1 Doom token
End of Turn: Terror Track 3, Doom 3 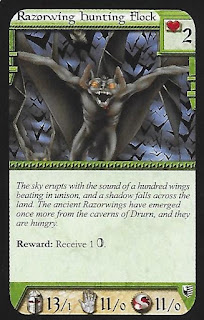 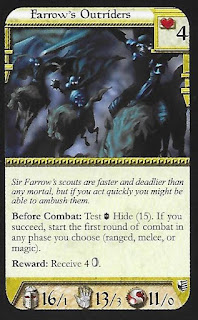 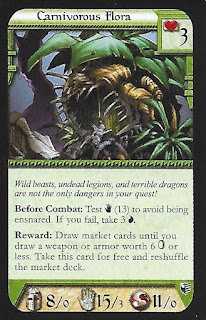 
END GAME!
I removed all the event and encounter cards from the red deck (hmmm 1, I only have the base set).  Shuffled the red deck... do you feel the tension building I do, there is no way in hell my pitiful character is going to survive against anything in the red deck with the advancements she has...
Draw the top Challenge card, you cannot escape (please!) - FIGHT TO THE DEATH, fight all challengers until your death at the claws of High Lord Margath, or if you are lucky and defeat him then you are allowed to go home. 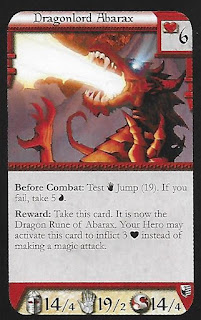 I shan't bore you with a blow by blow description but needless to say it was a very one sided battle.  I did manage to last to the second round of battle with the beastie before being roasted alive.

Addendum:  I forget to include - I LOST.  How could people not gather this?  Honestly!  Sorry in future I will make sure that I properly check my work to ensure you are not left hanging on a knifes edge as to whether or not I was alive or dead (my character that is), BUT I had thought it was rather obvious...  :)

SUMMARY
Did I enjoy myself - YES.
Will I play this again solo - YES, though more people the merrier.
Did I stuff up the rules and make a couple of errors - YES, but who doesn't, I'm sure someone will point out something I did wrong.  Just be nice when you do.

So there you have it.  I acknowledge the ownership by the way of the artwork of the original owners, etc etc.  I'll take down if directed, but seeing that the edition has now gone to 3rd I'm not sure what is or isn't still used.  It's purely for example of play and instruction.

The Hon. John
Posted by John McDonnell at 12:01 AM