Drought followed by rain (I won't say downpore because that doesn't happen).  Anyway, my old school chum Anthony rocks up Saturday after being missing in action for months to have a game of Xenoshyft: Dreadmire.  I've enjoyed this game and was lucky enough to have acquired it at a recent Buy Swap Sell event at the Blind Pig thanks to James!  Thanks again James, it has gone to a good home. 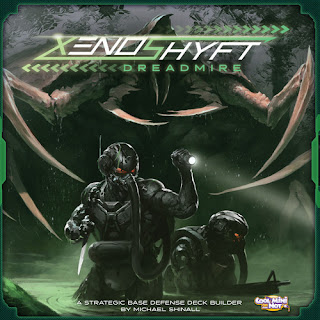 BoardGameGeek Link Here => LINK if you want to know more about the game.


First game was a total loss.  We made it to the third wave, second round before the base was overrun.  Anthony controlled the Barracks, I had Command.  Pictures below tell the tale... 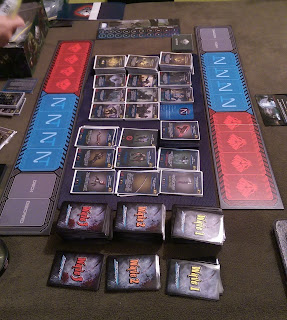 The Dreadmire version that Anthony had was sooooo much better than his original Kickstarter version (Onslaught).  This edition he had came with those rubberised play mats for the board, very nice.  The card lane for the creatures, troops and deck/discard was thick card stock which was very nice.  The company has someone produce specific card sleeves for the game, I'm going to have to get myself some, or I'll just take the poor mans option and recycle some old sleeves from another game.

We played a second game using the Immolation expansion, gone was the swampy fog, night and monsoon wracked world.  Welcome to a world were everything wants to burn you alive, were your equipment is your own worse friend in an engagement if you enemy has anything to do with it. 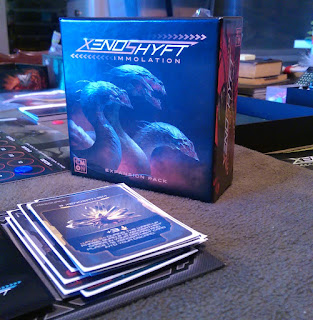 RESULT OF SECOND GAME - WIN
Base - 6 structural points remaining - phew (it was my purchasing of the three special fire protection cards in one round that saved our bacon, otherwise we'd have been toast!)
Anthony - Grafting Centre
John - Covert Operations

CRITIQUE
I'd have to agree with Anthony that the colour of the print on the cards made reading them really difficult, especially the blue on the black, sometimes even the red was difficult to read.  The wording at times was sometimes problematic, though it was just wrapping your head around the vocabulary more than the concept.  Still the game ran well.  Only having 3 creatures in the first wave and only having to face the Boss creature on the final wave (round 3) made for better game play in all.  Big thumbs up on improved play overall.  Now to find some kind soul who wants to sell their copies....

Til next time
The Hon.John
Posted by John McDonnell at 3:02 PM