GAME REVIEW: WARPWAR - from 1979 by Metagaming

I'm looking at video blogging soon, nothing exciting, but with a focus on the past.  I'm rather annoyed that the current generation think that games from the past are not worth playing (looking at The Dice Tower lot), they aren't trendy enough or represent terrible moments in history that is politically insensitive to certain people.  Poppycock I say... stop it old man before you put your foot in it, this is not the place to wax lyrical on issues that mean something to some and nothing to others, stick to the plot of this piece of diatribe (bitter critical attack?) more dribble perhaps.

So where was I going, ah yes... I was delving into my library of games and decided that I would as part of my grand experiment start a review by blog and then hopefully with the intention to video blog my summary. Does that make sense?  Well there will be this piece first, then there will be something on YouTube if I can master what I need to in under 3 minutes! 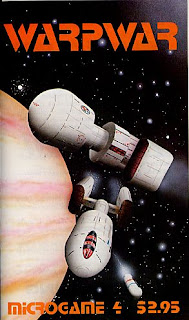 So my first game review from the past is!  Warpwar. 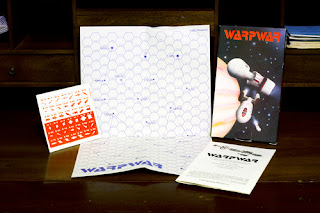 Yep that's it above, startling high stakes game publishing from 1979.  Today of course if would be far slicker, but this is where people fail to take into consideration the time differences, today is 2017, there has been a lot of water under the bridge since 1979.  Game companies have moved up a notch when it comes to production, the original (well I'm going by my copy and the one which you can see in the picture provided from BGG) was described as a microgame.  It was that!  The map was 21cm x 35.5cm (unfolded) printed on firm paper stock and folded into quarters to fit the box dimensions 8.2cm x 10.7cm.  The playing pieces were stock cardboard counters 42 in number, 21 of red and white respectively.  The counters are of the type where the counters are two part, the top printed surface being adhered to a card stock bottom.  I find that over time these do tend to pry apart and some of my older games have counters that have separated, which has left me wondering if they were left over pieces or if I've lost a counter! Very basic artwork for the time, no frills however some internal work by Winchell Chung was provided for the rule book, however it was not entirely necessary but does add some aesthetics.  The rule book is between A5-A6 (has to fit into box 8.2cm x 10.7cm), 16 pages in all.  Four pieces of artwork included for aesthetics. Only one pictorial example of game play. Some illustrations of playing pieces and map board sections.  The entirety is plain black on white print, nothing special or enhanced.

So yes compared to today, a very plain and no frills looking game, it's price was US$2.95 at the time, late 70's and early 80's.  Which doesn't sound like a lot of money by today's standards, possibly a US$10/15 equivalent (in my opinion) today.  Considering at that time my wage was AU$132/wk, these games were around the AU$10 mark, we were almost paying three times the US price for goods at times, double if we were lucky.

So BGG describes Warpwar:
Microgame #4 in the Metagaming Microgames series, Warpwar is a fast playing mini-game of interstellar maneuver and combat. You select the tactics and weapon power settings. No chance is involved in the diceless combat system. You must out-think your opponent.

You design your own spaceships with beams, screens, missile tubes and power drive. Ships move through space or jump along the warp lines connecting stars. To win, you must capture the enemy star bases. Advanced rules introduce system ships and technological advancement, which gives newer ships an advantage. Includes an introductory level for two players age 12 and up. Includes rules, map and counters.

So no chance involved... quite right as there is no die rolling in this game at all.  Combat is determined by a player being either the activated player or the other non-turn player.  Ship design and tech level determines how combat is determined as defined by three ship tactics of attack, dodge and retreat.  Weapons are either beam or missles and your defence options are screens or the dodge and retreat tactic. Ship combat is one on one, there is no multiple ship on one options in this system, so large scale battles with multiple ships may take a while but is unlikely considering the scale of the rule system.  The power drive is required to power up the systems needed when entering combat and to travel by warp.  The difference in power drive is also a determining factor with combat resolution. Damage is simple to apply, it did take me a while to get my head around working out how to understand the calculation of damage, but once I did it made sense.  Movement of ships, mainly those warp capable was simple.  The use of warplines was easy to understand for fast movement between star systems by warp ships.  System ships were also without ambiguity, they not being able to move to other stars except by being carried by warp ships specifically designed to carry them. Building ships was a simple process, there only being a limited number of systems to buy, unlike other games (such as Starfire).  This allows for quick builds in game time, which means that advanced scenario games can be played in an evening where players are familiar with the game.

Conclusion:
I would recommend that players start with the learning and basic scenarios before leaping into the advanced scenario which is where the game deign is primarily targeted. There are no designed ships in the rule booklet, which is a let down for those who might have liked a quick start to the game, certainly for the learning scenario it would have been advantageous. I would recommend that players keep records of ships types they have created that have been successful as an aid for future play as it will assist in speeding game play, again particularly with the advanced scenario.  Why they didn't just call it campaign play I have no idea because that's what it really is.
I think that this game has the potential for solo play, but will require the creation of opponent ships of various tech levels and such.  I'll most likely work on this in the coming weeks and tinker away, or more than likely though be distracted by another project.  Yet it does speak solo...

Posted by John McDonnell at 6:05 PM