A time to game.

This weekend I had my last loyal retainer come visit his Lord and pay his fealty, and he did it on his birthday no less.  I spoke with Sir Anthony the day before and he indicated he had a few new games he wanted to try out.  I have a feeling I'm very much the guinea pig test subject at times!

First up was Rise to Nobility (how appropriate).


HERE is the link to BGG and more detailed information.

The game reminded me of A Feast to Odin, with the acquisition of goods, but there it changed in that managing the placement of housing and settlers became a juggle.  Finding income, obtaining resources, becomes problematic if you do not obtain meeple workers (can't remember the title).  On more than a few occasions I would think I would be able to perform an action only to find out I did not have the worker meeple or lacked the house needed to place a settler which game me the much needed worker meeple and nobility rating increase.  The bulk of the victory points came from "building" settlers, with the number of resources (up to a limit) producing victory points when created.
I was really behind the eight ball with this one, I literally learned from my mistakes and from seeing what my opponent was doing.  I like the game, but would need a few more games, and certainly one with four or even six players.
Verdict: Thumbs Up

Next up Bargain Quest

HERE is the link to BGG for more detailed information.

Getting my head around the mechanics took a couple of rounds, and coupled with the luck factor of the cards drawn I was struggling from word go.  Oh I fleeced the heroes of their money, but wasn't able to turn that into actual victory points to win.
Essentially there are three monsters that need to be defeated by the heroes.  Wounds for the creatures are the number of players.  Which hero you choose to fleece depends on what you have in your display, the higher the Appeal value the most likely you are to get the hero you want, many of the cards you may have in your hand may not even be eligible to be equipped with the character.  This is perhaps what annoyed me the most with this game, the luck factor with being able to draw the right combination of cards and winning the hero your cards can affect.
As of writing this post, I found a download of the rules and found I was able to obtain victory points from the gold I had stored. It was on a 10:1 exchange, but I did have a fair bit, possible 4 victory points in the end.  I'd most likely have still lost, but the margin would have been far slimmer.
Verdict: On the fence, though leaning towards a Thumbs Down.  Will need to play a few more games, especially with more players.

Following this was Evolution:Climate, one of my games. 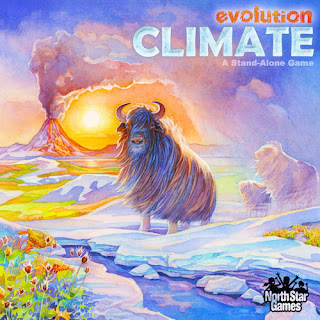 HERE is the link to BGG for more detailed information.

I'd played this before at the club, which prompted me to buy a copy for myself.  So while I had played it, I'm not the best at remember in great clarity how the game played.  After we had grasped the nuances it was game on.  My opponent was cheeky to say that he had been counting my victory points from memory, damn those sort of people...
Never got to the final part of running out of cards, the climate went to Ice Age and all the species died out in one fell swoop.
Verdict: Thumbs Up, but you'd know that from my previous post.

Finally the last game of the day was Outlive. 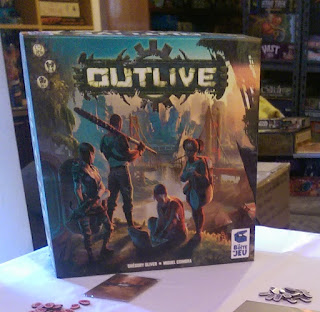 I really enjoy this game, so much so I'll be asking my local FLGS to order me in a copy.
It takes skill to place your Hero tokens (their value determine the resources they can acquire or their hunt skill) remembering that they can only move in one direction and cannot have a final placement which places them on a area which has a hero of their own, regardless of activated or not.  Dashing about trying to find the resources to feed and keep your bunker operating is a challenge.
I've only ever played this as a two player game, would love to try the four player game once I obtain a copy.
Verdict: Thumbs Up.

I am writing this up Sunday, not much likelihood of another game today, but yesterday was indeed welcome and I thank Sir Anthony for taking the time to come game with me, especially as it was his birthday.

Till next time.
The Hon. John
Posted by John McDonnell at 3:25 PM