A little bit of luck and you can find?

A little bit of luck!  Something I'm not blessed with, but occasionally I will stumble across a find which helps to enhance and replace my always increasing games collection. 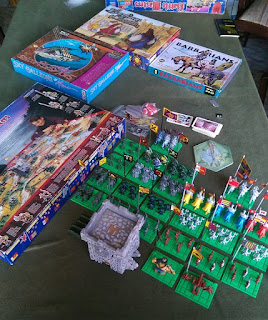 I am always on the look out for old games that are within my pensioner's budget. In my latest acquisition I was lucky and obtained four games within budget.  Now two of them I already owned, they being Sky Galleons of Mars and Battle Masters.  Sky Galleons I wanted for the extra ships and the spare or replacement components.  Battle Masters I was really happy to acquire as I own two sets, but not the figures and tower.  I can now happily play this game, though I might have to strip some pieces, only two models had broken weapons, but I really can't complain.

More information on Barbarians can be found HERE

First of the new games is Barbarians.  I was not originally going to pick this one up, but when I was looking at the BGG site and reviewing the information there I spotted the words "Best:1". I look more these days for games that can handle a solo mode. 1000 counters!  I will have to get to this game in time, but for the moment it has been rescued and placed in a good home - mine.

More information on Courtisans of Versailles can be found HERE

My second new acquisition of Courtisans of Versailles, it just intrigued me.  It was different, no idea how it plays or if it will even play well with the group of people I know, but I will give it go in due course.  Reminded me of En Garde! though which was probably why I obtained it.

Till next time.
The Hon. John

Posted by John McDonnell at 4:05 PM