On the weekend I was extremely lucky to acquire a copy of Superpower and old 1986 board game made by Games Workshop.  Yes Games Workshop did once produce board games (Fury of Dracula, Judge Dredd, Warrior Knights etc) and role playing games (under licence - Runequest, Call of Cthulhu, Stormbringer, etc).

So my copy of Superpower showed it's age... nothing wrong with that, I'm no spring chicken these days either.  The box was a little worn, mildew had stained the surface of the box and map board.  The games playing pieces were intact, the play cards in particular almost looked like they had never been used.  Then there was the rule book... very sad... very coffee stained sad. 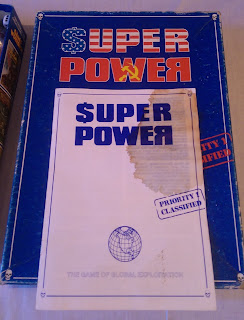 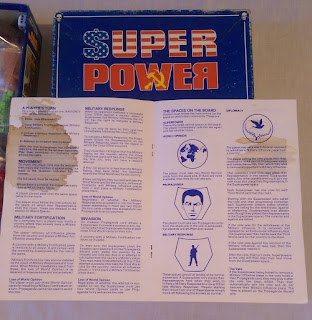 Well I'm of the behavioural sub-type that makes OCD look like a mild malady.  I spent the morning after I received the game typing the rules up and scanning the pictures.  Having worked in Quality Assurance I was fairly skilled at document control, editing, proofing etc.  I'm not saying I may not find an error (typo) here and there, but on the whole I believe I copied the entirety without omission - yes even the copyright material at the end.  I scanned the artwork, and managed to erase the stains which marred some of the pieces. 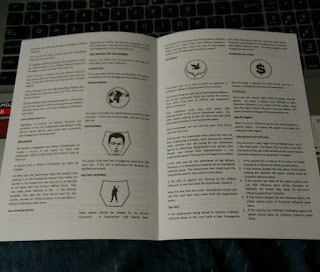 Above you see the beta edition printed.  Sadly I ran out of ink for my printer (my daughter wanted 30 odd resumes printed so she could go job hunting on the Sunshine Coast), and the draft version was so poor that I could only get one decent page and the rest were virtually unreadable.  Hopefully I can afford some more ink this pension day and will try again.

On the whole I am very pleased with the outcome.  It's only a 2 A4 sheet set of rules, so I plan on eventually printing 6 sets of the rules (that being the maximum number of players), so that each player has access, rather than fighting over the single rule book.

I have done similar things before, did this with Encounters (an old Mayfair game) and now need to hone my skills on creating counters.

Till next time.
The Hon. John
Posted by John McDonnell at 9:23 PM