So as is my usual approach to any new set of rules, I start at the part which interests me the most - the figures and "army" composition.  I always worry about the little things like rules last.

I dug up my boxes of Darkest Africa figures and had a small "cry" at the small number - all right there are actually a few but not enough to go as mad as I wanted to initially.  I may actually have to buy some figures (this will mean having to sell some things if I want to do this, so I'll have to be convinced that this game is worthy of the sacrifice first).

Opted for a very tongue in cheek, lets go teach the natives not to burn our trading outposts. 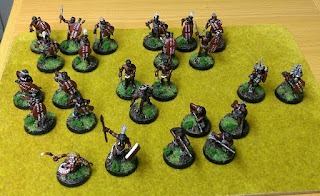 A Zulu-ish like group, which will teach them white men to come out from their settlements!

So looking at this I may have to think about some missile troops for the natives, whether that be bows or Ruga Ruga or Askari.  As I have said, I've not played a game or read the rule in detail yet, but I am getting there.  I've got the main things organised which is at least figures to play the game with.  Terrain should be fine for now.  Hopefully the next post may be some form of report on a game.

Posted by John McDonnell at 8:23 PM