It's the Time Machine for me at present, the curse of Paul and his linking me to a solo board game group... it has me looking at what games I have that can actually play solo.  Today I'm looking at Melee and Wizard and the Mircogames from Metagaming.

So I've ripped straight from Wikipedia "Metagaming Concepts, later known simply as Metagaming, was a company that published board games from 1974 to 1983. It was founded and owned by Howard Thompson, who designed the company's first game, Stellar Conquest. The company also invented Microgames and published Steve Jackson's first designs, including Ogre, G.E.V. and The Fantasy Trip."  There you have it in a nutshell, does that help?  Nope didn't think so, below is a link to the Microgames that many people will be familiar with.

That should jog most peoples memory of that was in many people's minds affordable gaming at the time.  Pithy little games, Steve Jackson got his launch here and we know where he went from there, though his Munchkin is his lamentable millstone to date!

Below are the MicroQuests I own - six in total, all unpunched or "opened". Do I dare to play them, I guess I will now that I've decided to.  I shall have to see my friend Paul of BPLaser about getting the hex system lasered and then I shall be ready to have a go at it.  Yes I think I shall have a definite go at this one... but you know what I'm like don't you dear reader, as reliable as a punter on a race day!


By the way I am chasing Melee and Wizard the original two games, while I have the Advanced booklets I'd love to get my hands on the boxes just to complete my obsession, you know what it's like to have OCD!

Here's a picture of what they are in case you need a memory job, drop me a line if you can help, charity is happily accepted!!!! (yes that is a lot of explanation marks!) 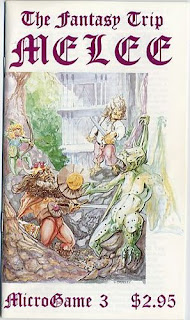 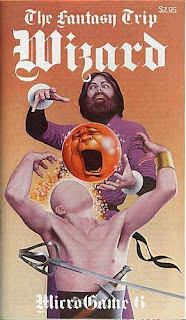 The Hon.John
Posted by John McDonnell at 11:15 PM