Recently a friend of mine, Paul, invited me to join a group on facebook for Solo Boardgamers (soloboardgamers).  This was intriguing?  What games were there, was there anything that might interest me?  Yes there was, admittedly most of the games being listed were modern games, so I went for a delve in my horde and found this one (of many surprisingly enough) - R.A.F. 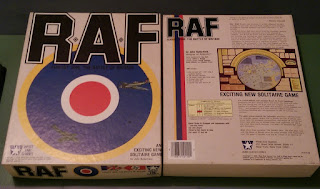 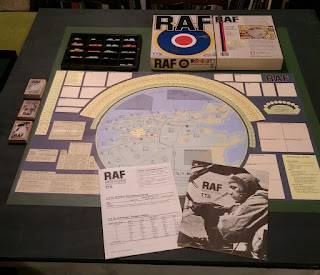 There is my copy all exposed to the elements.  Everything appears to be there.  I've popped over to BoardGameGeek and downloaded some files, which I shall peruse to see if they have any relevance or aid in playing the game.  1986 is a long time between drinks, I confess my memory is blank with this one, I may have played, helped a friend play it, watched it play, or even dreamt it being played!  I'll report back in due course as to my experience, assuming I'm not again diverted by bright shiny objects...

John
Posted by John McDonnell at 1:46 AM