The Lord of the Rings Radio Dramatisation BBC Radio 4 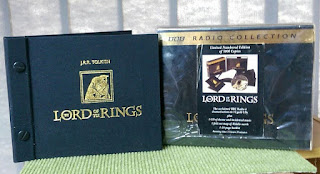 I can remember many years ago when radio still played a part in my daily life.  Thankfully Australia when I was young still had strong cultural ties with Britain and we still received much in the way of entertain programming.  The Lord of the Rings dramatisation was one of the best radio plays I had listened to apart from The Hitchhikers Guide to the Galaxy.  I can recall the delimma that was the choice of either staying home and listening to the next episode or going to my game club!  It was so hard a choice.  I think in the end I bought a 90 minute play tape, put the device on slow record (can't remember the exact terminology but it doubled the recording time on the tape, a 45 minute side became 90 minutes) and hoped that when I came home I had recorded the entire episode.  In the 1980's the broadcasting authorities were notorious for not keeping to broadcasting times.

So for a long time I cherished my taped recording of the radio play.  Eventually someone in Brisbane had this appear on their shelf and when I saw it I just had to have it.  The fact that it was apparently a limited numbered edition was of no concern to me, I'd have been happy with just an ordinary copy at the time.  What did excite me more was that there was a CD of theme and incidental music included, if you have not listened to this then I suggest you find yourself a copy, it is well worth the listen.  I have included the wiki link below rather than plagiarise, so read and find out what interested me.  Find a copy, listen and enjoy, I certainly did.

Posted by John McDonnell at 7:05 PM