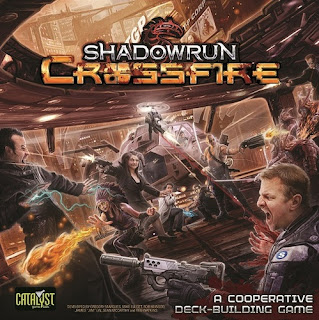 From BGG:
The shadows of the Sixth World have every kind of danger you can imagine: ultra-violent gangers, flesh-eating ghouls, mages that summon spirits from toxic waste, backstabbing corporate raiders, hard-nosed police officers, and even dragons. You don't have much — mainly your guts, your wits, and your friends — but maybe that's enough. Between you and your teammates, you can sling spells, hack the Matrix, talk a tiger out of his stripes, and bring down a charging ork from a hundred yards away. Will that be enough to face down the worst the mean streets can throw at you? You're about to find out.

Shadowrun: Crossfire is a cooperative deck-building card game for two to four players set in the gritty, cyberpunk fantasy world of Shadowrun. Play a shadowrunner team and take on tough jobs such as protecting a client who's marked for death, shooting your way out of downtown when a run goes sour, or facing down a dragon. In each game you'll improve your deck with a mix of strategies, while earning Karma to give your character cyber upgrades, physical augmentations, magical initiations, weapons training and Edge.

Played this today with Leslie.  We played it as a 2 player game, I think 4 player is the best option, but never the less we enjoyed ourselves.  I keep getting confused and stuffing up the order of play at times, but apart from that the game flowed smoothly.

Much like the Pathfinder game, you can develop characters over play sessions, however with Crossfire I could actually work out what I was doing where the Pathfinder version left me more confused than anything. 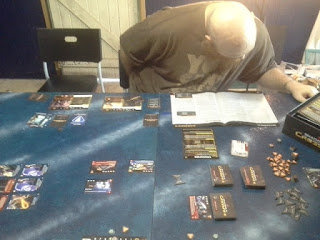 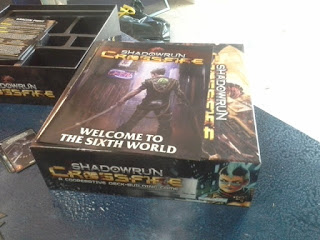