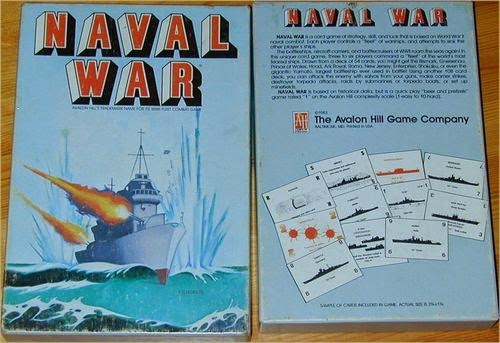 Today was pension day and I had a little bit of money to spend.  I popped into ACE Comics at Annerley and bumped into Paul H the owner of Emperor's Legion.  Paul opened the shop the chin wagged for a while and then I spotted Naval War.  I could not help myself and I bought this.  I have fond memories of playing this back in the 80's.  Now I hope that the current generation of friends are willing to give it a go.  Can play up to 9!

Wanted the Conquest 40K LCG but stocks have sold out, and the word I'm hearing is that people are buying four sets just to get 4 copies of the singular cards that come in the starter.  When all you want is the base game, not being able to buy because people are soaking up the stock is frustrating.  It's like with the X-Wing game came out and collectors rather than players were buying stock.  It really is a silly world we live in.
Posted by John McDonnell at 7:30 PM