The Bride and Groom 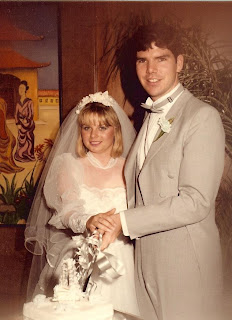 It was 25 years ago that Michelle Debra Green agreed to marry me. I had taken my wife to dinner and after a very short courtship of a few months I proposed to her. She said that she would think about it and let me know by the end of the week. I found out later that she was already going to say yes, but didn't want to appear to eager. When she told her mother, her mother was over the moon and chastised her over not giving the poor man an answer straight away. So Michelle's parents were ecstatic over the news, mine were not. My mother was mortified, my father indifferent. The only people who were genuinely happy were my Uncle and Grandfather. Notice to those who look at the picture I was a thin chap once and did have hair!
Posted by John McDonnell at 3:48 PM