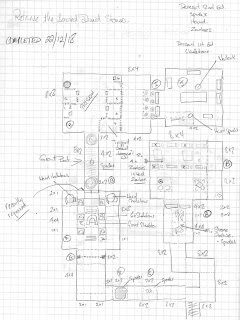 Picking up the pieces and continuing on from the last session is always an interesting exercise.  Just how good are my notes (yes just how good are they – sometimes none existent as I forget to write down some of the really critically important things, thinking, there’s no way I’d forget that – and yes I do just that, forget it).

When last I left my party of three, they had left the dungeon of the Archfey test and wandered out of the enchanted mist to discover their lost companions.  The druid and bard told them they had not lost any time in the enchanted mist at all!  It’s like it was magic… well it was.  With the party now all together they resumed their adventure in reclaiming the stone taken from the druid’s village.

The entrance to the Hiding was found and the magical seals discovered.  A riddle was needed to be solved to open the doors.  A cry of “I hate riddles” was heard, but the others were more than happy to solve the problem by applying their brains to the problem only resorting to a die roll to solve the riddle if it could not be solved.  They had the answer fairly quickly, they even had the items.  What was even more hilarious was the other members in the group questioning why the bard had a tailors kit on him.  The riddle was:

Next was how to get the doors to open now they had guessed the answer?  The fonts on the sides of the doors was the answer.  However the Bard wanted his property back, so for the argument of the cost of a pin and a needle the fate of the entrance to a dungeon was held on the prick of a pin or needle!  No one bothered to check if the doors had a latch to keep the open once opened?  This would have saved some time but alas this did not occur to them.

The stairs led downwards.  They checked that they were not damp (they did not trust me for some reason).  At the base on the floor was a giant painted red skull on the floor.  The group avoided it, not wanting to step on it.  They appear to think I trap all markings on the floor?  The group chose the right hand passageway (thank goodness for that, though it would not have been that much of a bother had they not).  This led into another riddle room and “trap”.

This room had bright murals of wetlands with lizardmen hunting the many birds that lived in them.  These birds of which I named many proved the one clue to allow them to answer the riddle I had placed on the statue.

“Which of the feathered tribe would be supposed to lift the heaviest weight?”
Answer: The Crane.

The wall stone which had the painted crane also had the most wear and tear and could have been spotted had the group searched for another option.  Of course Monty Python jokes came to the fore.  “In order to maintain air-speed velocity, a swallow needs to beat its wings forty-three times every second, right?” and on it went (in my mind…).

The room as I said had a statue it also contained a large magical glyph and a double set of doors which it “guarded”.  When the crane stone was pressed the doors opened, and two large “undead” spiders dropped out of nowhere.  [Here comes the poor GMing – had the doors open and I and the players forgot all about the newly opened room and only concentrated on the combat with the spiders!]  These spiders were of the magical variety of my creation, when they died they went to the glyph in front of the doors and began to “regenerate”.  When one of the party went into the glyph, they froze and started to lose hit points and sped up the “regeneration” of the spiders.  This perplexed and then the party (and I) remembered the newly exposed room.

Yes the newly opened room was a barracks.  The occupants were necrotic zombies, so I could argue that they had not become aware of the life force of the intruders until they entered the room!  The spiders were neutralized and left to “regenerate” slowly in the glyph while the zombies were engaged.  These zombies were not nice.  They could vomit, and they exploded when they expired. Someone noticed that this stopped their bodies being used to test traps.  Combat was bloody and draining, requiring the party to rest.  Paranoia crept in as they worked out if they could secure themselves in – without dooming themselves (see previous blog, the room of the water elemental).  Rest was taken, the Spiders scuttled outsides, but after the rest and upon opening the doors, they had gone – but to where.  A search revealed nothing.

The zombie room had some interesting knick knacks of which the desiccated pixie and skull mask were the interesting pieces.  Terminology is an important part of English and I’m a little out of practice, I used mummified for the pixie when I originally described it.  Members of the party took this to mean that it had been prepared like the Egyptians had prepared their dead, I had meant as had been dried out.  Which as I now look up in the dictionary I am correct in my use of the word.  This leads me to think of my use of verbiage to reduce confusion, but then that is all part of the game of subterfuge.

Back to the beginning, and down the other passageway.  This time they saw and obvious trapdoor with a lever, and an open pit.  The impulsive Druid stood on the trapdoor and pulled the lever.  Yes the trapdoor opened and he fell onto the spiked floor below.  It was obviously a trap!  I could not believe that someone would actually pull the lever…  The pit was “filled” with a swarm of insects, which the Druid took care of with his Thunderwave spell.  This did create a problem with the stability of the pit, and I made the party test to cross.

Across the pit was a large chamber that that revealed an even larger chamber or audience hall.  A closed portcullis blocked the way to the audience hall.  The view to this hall revealed a seated skeletal giant and a number of suits of armour on plinths.  Attempts were made to shoots arrows, then magic at the perceived threats, even the druid’s crow was sent through, but some barrier existed that stopped all right on the portcullis boundary.  The trick was getting through the portcullis and pulling the lever.  This proved less than challenging, I had hoped they would have wasted some spells and resources – but this was not to be.  With the gate raised the combat began.  While the large undead beastie proved a good soaker of damage, it was the high AC18 creatures on the plinths that gave the party the greater distraction.  Eventually all good things (from my perspective) come to an end and the fight finished.  The druid found more levers to pull and found a pop up cupboard with boss’s treasures.  The newly repaired door concerned the group for a short time, but not long.  It was the rotting bridge beyond that concerned them most.

It is interesting that you provide the party items that can aid them in future adventures.  For instance they obtained Phoenix Feathers (3 members did) which one of them could have used in solved the riddle of the rotting bridge.  Oh no, we won’t use this precious item to solve such a mundane thing as crossing a 20 foot gap.  There was a magic glyph on each side of the bridge.  Standing on the glyph was a alarm bell as well as half of the activation code to forming the bridge.  The other half was on the other side of the bridge.  Ah, the time spent working out how to get to the other side was entertaining all the while broken by the occasional visit of an enormous giant vampire bat.  Finally a rope was fastened to other side and a person activated the other glyph, causing the glyph to activate and the bridge to form.

Now they were confronted with the “ruins” of a prison containing the last occupants… all safely locked in of course.  Until one proved to be a zombie blink dog, then all hell broke out.  Combat ensued, but like all it favoured the adventurers.

My lock trap, proved too easy to open.  They are guessing my logic, or perhaps lack of in working out how to open doors now.  Upon opening the now last door they were confronted with the evil cultist who went into how monolog, which was cut short as the party went into kill frenzy.  The Barbarian found out that Hold Person is not fun when it is cast on you.  I found out as a GM a spell caster on his own with no back up but two spiders just doesn’t have enough clout!  The result was inevitable, though the party do not like poison.

Time had gotten away from me on this day.  My children and their partners had decided that they were going to come and spent Christmas with me on this day rather than on Christmas Day so I called the adventure there.  The Brisbane weather was horrible, the day before was 35C.  Jason was suffering Lurgy (which he reacquired only from having to go back to the Doctors), and Leslie was also taken out of action during the day.  Leaving me with three players at the table, and one sitting at the other end of the room, hoping not to infect everyone!  All up a good day.  Leslie made pumpkin pie, which was consumed by all.

Treasures
Pair of severed ears of a string, pair of bone dice, brass knuckles
Miniature crystal ball, vial of iron filings, prepared poultice
A stone arrowhead, vial of liquid (yellowish), magnifying lens
Jeweller’s monocle, vial of black liquid pipe carved from whalebone
Silver charm bracelet, small carved bird (crow) [magic], a small bell [magic], 5gp
Mummified pixie
Partially shattered one eyed skull mask
8sp
A pair of pliers, a scented bar of soap, a tree feather token
A bottle of red ink, a folded and torn piece of paper containing a sketch of a strikingly beautiful woman, 1gp
A small round mirror, 6cp in a dirty cloth purse
A note in gnomeish, a lady hair brush full of hair strands, 6 gp
Signet ring from some landed gentry, comb carved from pink coral, 10cp
A novel with a bookmark 1/3 of the way through (gnomeish), small topaz gem
17cp, 14sp, 10ep, 10gp, 3pp
Potion of ? (Red liquid glimmers when agitated)
Arrows+1 x 12
A small packet of powder resembling very fine sand?
A staff carved in the shape of a python
A fan
A hat
A Great Axe with the swan carved into the blade with silver and gold.

Posted by John McDonnell at 7:27 PM