I purchased an App called Board Game Stats back in 2017.  I guess I bought it to help me understand whether there was any substance to my claims that no one played any games with me.  I felt very isolated and played mostly solitaire games.  Over the last two years my gaming life has improved somewhat and while I still struggle with reality and life on a daily basis the App does provide a nice little reminder I do have friends and that I do get to have games and enjoy myself. 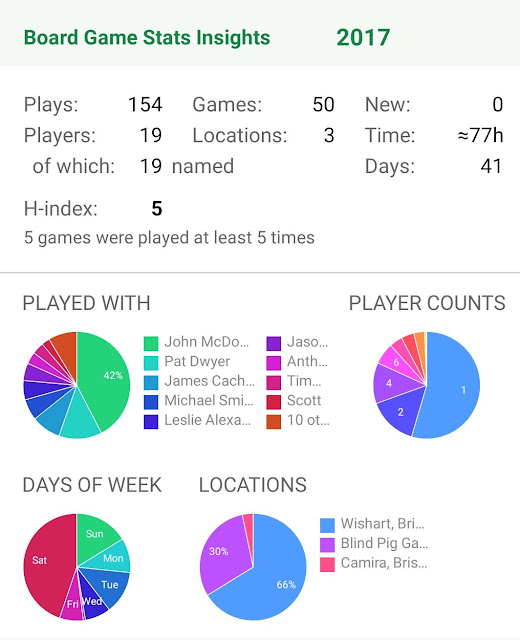 As you can see a significant number of games were played solo.  I did though include in my database 19 named people, which I am pleased with.  These are all people I know and continue to do so.  I’d like to think that they are still my friends now.  I met the vast majority of them through the Blind Pig Games Club.  I’d say that without the club my capacity to met and game would have me home and alone and with a social group of less than what I could count on one hand (and that’s being optimistic).

Weekends are still the primary game days as most people work as these are the only days they have available.  As a pensioner I have free time aplenty, but I have the problem of juggling my mental health issues and those other life difficulties that get thrown in my way.  In the end I find that the safety of solo games while not satisfying is there to distract me.  Needless to say I was able to get the occasional game in over the weekdays as the statics show.
As can be seen from being a solo gamer, most games reflect the residence as my primary location with the Blind Pig being the second home for me. 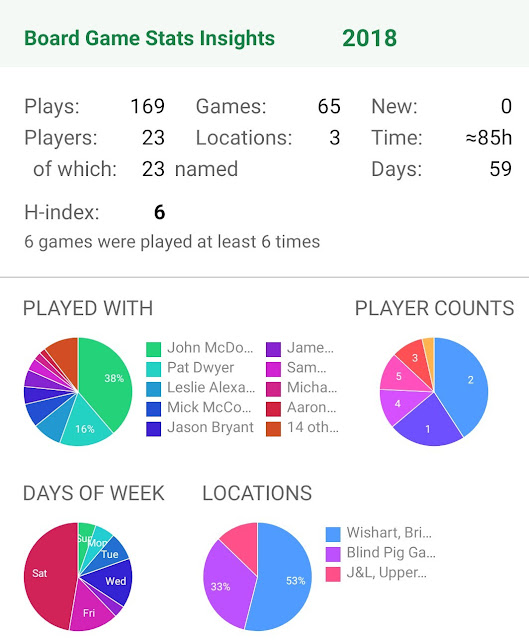 An increase in 15 unique games played over last year and another 15 games played.  The biggest game changer I am looking at here is a change from solo gamer to social gamer.  Going from 44 (12%) days to 59 (16%) days of games a game in a year is fairly significant – even excluding the solo game component.  The Blind Pig met for fifteen of the days recorded for each of the calendar years.
More games were played that were not solo!  The increase in two player games can be attributed to the early set up of the club and my good friend Pat and I getting some games in before the crowd arrived.  I also have been enjoying the company of some locals – Leslie and Mic who have been happy enough to engage me in the occasional game when they have been free.  The increase in board games being played at the Blind Pig and the player count has seen the rise in the statistics.  The more people I get to game with the happier I am – though there is a dark side to this for me.  I enjoy playing games; I don’t enjoy being targeted as I’m a poor player (which I am when I fail to grasp the game quick enough).  I can’t say anyone enjoys losing games, but at least make it a painless experience – especially if you know how others may or may not deal with “reality”.  Hey I bounce back eventually, but it takes a while to reset my mind to neutral.

I now start 2019.  A day no different from yesterday, I have some friends who are willing to share some time to play games and that helps pass the endless ennui.

Till next time.
The Honourable John
Posted by John McDonnell at 2:52 PM