Welcome to the other side (of Tunnels and Trolls), where you get to role play the not "good guys". 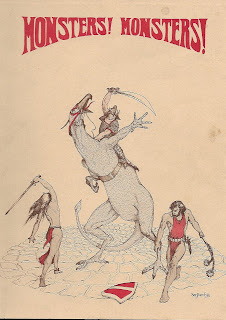 My copy has seen better days, but considering that my copy is a second printing dated 1979 I'm blessed it has lasted as long as it has, especially with the spiral binding.

I've been doing a bit of a bender these days and going back to the roots of my gaming.  My old board games are still good, though finding people who are not immediately derisive of them is proving problematic.  It would appear that people will only play what's "hot" and recent, apparently anything that is five years or older in date is "so unfashionable" and contains "game mechanics" that have been supplanted by more modern developments.  Phooey I say.

I loved Ken St. Andre's introduction where he refers to Tunnels & Trolls (hereafter T&T) as "the poor man's alternative to the expensive Other Role-Play Game".  I think we can all guess which one that would be...

So this RPG uses similar mechanics to T&T's, though the rules indicate you do not need to own the other to play this system.  T&T does though "contain detailed tables of weapons, high-level magic, provisions,etc". 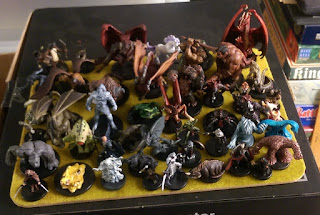 There are 52 Monsters listed in M!M! and I've been able to source reasonable models to represent them.  I really do no regret my generosity with a trade many years ago for some Star Wars figures... really wish I still had the vast horde of plastic crack to throw around the table.  Sigh, nothing I can do about it now though, thankfully I kept the "one of" for my collection.

As the game reflects it's all about the Monsters coming to a village, city or whatever scenario the GM has come up with.  Today it would be like Descent or another other of the Dungeon Crawl games.  I'm still in the process of reacquainting myself with the rules, the turn sequence goes like this:

So yes it's very much in the mould of a classic Dungeon Crawl.  The game mechanics operate on the simple die six, with multiples of the die being cast and the pips added up and compared to an opponent to determine the outcome.  Simple, luck driven mechanics.  Nothing wrong with it.  Role-play games are first meant to be an exploration of the imagination, with some excitement of combat thrown in.

Names of spells are hilarious and I'm sure some people might take exception to some the titles, such as Yassa Massa for an enslavement spell.  Other titles are silly, but explain simply the spells, "Oh Go Away" for fear, "Hidey Hole" for invisibility and "Rock-a-bye" for sleep.

I can recall some discussions with a friend at MUDDA (Melbourne University Dungeons and Dragons Association - I think) over the merits of T&T compared to D&D - we agreed to disagree.  Yes it may seem frivolous to some, but once you peer past the veneer you can see an acceptable system which can bring many hours of enjoyment.  I know from experience that my gaming group in the early 80's enjoyed this system, and played it just as we played so many of the other competitors to D&D.

So my goal, for what it's worth, is to reacquaint myself with the rules, rustle up a campaign and let loose the Monsters! of war.