Today was the last Pig for the year, it always makes me sad.  Nothing until February next year in the way of interaction or games, for a person that is a sufferer of all manner of ills, this is never good. 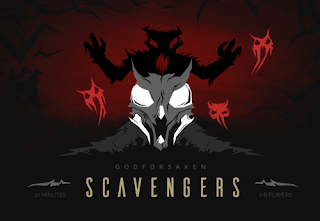 Here is the LINK to BGG if you want more information.


Godforsaken Scavengers is a survival adventure where players take the role of few desperate survivors in a dark and deadly insect world. Together* they strive to cross several unique areas to save themselves at all costs.
Every turn, players choose a scavenge pile to reveal cards from. They may press their luck and reveal as many cards as they like. But among all the great actions and opportunities a peril can be revealed, discarding all the revealed cards and inflicting an affliction. At the end of the turn, players either burn cards to feed themselves or they starve.
Through the course of the game, players will gain afflictions from many horrifying encounters that not only threatens their lives but also cause various unpleasant effects. On the other hand, great portion of the bad luck is mitigated by smart use of cards and player interaction.
* The game features several scenarios that adjust the rules and differ in the amount of cooperation between the players from pure co-op to more individual playstyle to a competitive race mode. The game also focuses on creating unique player stories using its evocative lore on every card.

Pat brought this one along, another of his kickstarter purchases which I personally am always interested in seeing.  I believe that the consensus was that a few more games had to be played to develop a feel for the game.  I liked it, it can be played solo which I was happy to see. 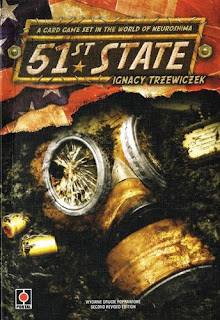 Here is the LINK to BGG for those who want more information.


The world you know no longer exists. There is no government. No army. No civilization. The United States have collapsed. And now, thirty years after the war started, new powers finally try to take control over the ruined country, try to establish a new order, try to control others and create a new country, a new State: the 51st State.
51st State is a card game in which players control one of the four powers (mutants, traders, New Yorkers and Appalachians) and try to build their very own new country. Players put new locations into the game, they hire leaders, and send people to work in buildings to gain resources and new skills.
Every card in 51st State can be put into play in three different ways. You can invade a location to gain many resources once, or you can sign a contract with this location to gain one resource every turn, or you can attach the location to your State so you can use its skill. One card, three possibilities. Lots of decisions and choices that matter.

Jason sat this game out as he chaperoned as rules teacher.  Not an easy game to teach the rules to, however once we started to play and picked up on some of our mistakes it proved itself to be an entertaining game.  Certainly one I'll add to my collection in time.

The other two games I played were Unfair and Kingdomino, both enjoyable games.

The club was well attended today as it was advertised as a Buy Swap Sell event, and it attracted more than the usual number of attendees.


Other games were in play: Warhammer 40K, EPIC 40K, and Aristeia.

Certainly Aristeia appeals to a number of players.  LINK here for more details. 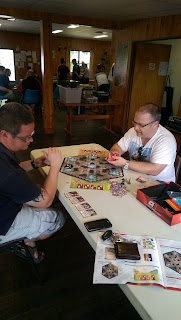 The Hon. John
Posted by John McDonnell at 2:30 PM