The Art of Listening?

Who listens these days?


When I was a younger person the 60's and 70's had a wonderful device called the radio.  This device provided a service which delivered entertainment, of which some actually had some value to me.  Now while it is 40 to 50 years ago now and my memory is horribly poor, and apart from doing some boring research (which I'm not going to do), the only decent host for radio shows back in those days was the ABC (Australian for anybody outside Australia reading this) and it's affiliates.

I can remember Dad & Dave, Biggles and The Goon Show in particular, though I'm sure there were many others.  As I grew older with the decades I sourced many of the radio plays which occurred in these decades but which I may not have heard or have consequently forgotten.  Thankfully many of these are now available in the public domain and are free to obtain or listen to.


Yet who today produces radio entertainment?  I know that the UK still does, not sure about the USA as I don't follow their brand of humour or entertainment.  I don't own a radio anymore apart from the one in my motor vehicle, even though it's recommended for states of emergency events (cyclones, weather events, haven't gotten to war or civil unrest yet).  So for the few times I turn my radio on in the car it's just long enough to stick in a CD to listen to music or hear the news.  I have no idea if any of the stations host any radio plays of any kind any more, perhaps they do, but I'm sure it's not in any prime time slot.

Certainly most books today are produced as audios, of which I am extremely thankful.  Certainly when I was painting and modelling this was a godsend as it allowed me to do two of my favourite things at the same time.  Now I use the audios at night to shut out the tinnitus and my wife's snoring, so I usually have to replay a novel several times to know the entire plot.  Yet it does serve a purpose.

Wit and satire is something I appreciate and it is something that the British or certainly those from the British Isles express the best.  Americans are generally a poor substitute, often the mimic but will occasionally produce a rare diamond worthy of note, though I'm desperately trying to think of one right at this moment...  Perhaps were they did excel was in their radio plays for detectives and mystery and for me Nero Wolf, The Shadow and Jackie Chan are excellent examples of the genres. 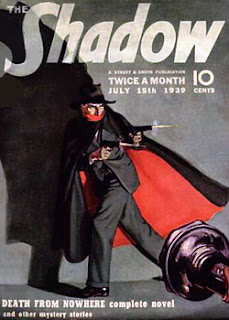 So I hope that someone still has the courage to continue to produce this type of work, it does have a place in our lives. I think that where people spend so much of it travelling/commuting that listening is not an art form that should be dismissed.  Reading is good if you are say in a bus or train, but if you are driving then this would be an excellent option.

As always the older I get the more drawn to the past I become, it reminds me of a quote from Babylon 5 I like so much which I shall share with you as my parting rambling of the day.

"No regrets then?"
"A few. But just a few. You?"
"Oh, enough to fill a lifetime. So much has been lost, so much forgotten. So much pain, so much blood. And for what, I wonder. The past tempts us, the present confuses us, and the future frightens us. And our lives slip away, moment by moment, lost in that vast terrible inbetween. But there is still time to seize that one last fragile moment. To choose something better, to make a difference, as you say. And I intend to do just that."
Centauri Emperor and Sheridan, The Coming of Shadows
Posted by John McDonnell at 7:01 PM