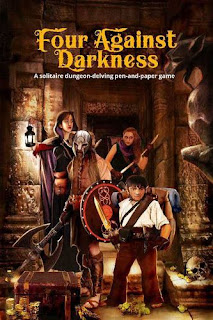 This is my latest "addiction" at present and what a captivating game this is.  Many long time readers and people who know me will be aware that I spend about 95% of my time at home.  I get an occasional visitor (gamer), but for the majority of my time I am left to my own devices.  I have a fair number of games that are solo and are quite good, but the set up and take down times compared to this little gem are quite different in scale.  In 4AD I can set up in less than a minute where with a traditional board game I probably still trying to get the box off the shelf, onto the table, opening it and just getting the contents out!

The game gives you enough scope to play with, which is what I want.  I've been a GM for many years, since the 70's actually and I remember the very early days of silliness of a 10 by 10 room stuffed with monsters and treasures without comprehending the dimensions at the time!  The game hearkens back to a simple time of just wandering the halls, encountering naughty creatures begging to be exterminated in the name of whatever greater cause you believe in, or you just happen to be bloodthirsty hooligans.

I have just recently finished my first 20 adventures playing the standard monsters in the first book shown above.  Then I became aware of Fiendish Foes, so I propose that the next 20 adventures will be filled with the creatures and treasure generated from those tables.  I have in those first 20 adventures cycled through a fair number of characters, lost a few, and have now some at level 4, but have all the characters (classes if you like) that are available.  Yippee!  So it's onward, and awaiting more releases.

I posted a video on YouTube to celebrate my 20 Adventures and spread the word of this marvelous game. I noticed a few comments on other platforms asking about the printing and such of my rule books so I will now explain my set up.


For starters I obtained my 4AD as PDF files and printed them on my home printer (rather expensive in the long run).  I used the option of booklet and double sided printing which meant that an A4 page could be cut down the center and placed into the plastic pockets I had obtained.  Originally I have folded the pages and attempted to staple the lot, but the thickness of the booklet was too much was a standard office type stapler.


This is the heart of keeping everything together for my booklets.  Works well.  In Australia we have a chain recently opened (well it's been here a few years now) called Daiso, sort of like a 100 Yen shop.  Everything is AUS$2.80 (mostly), so for a small outlay I have been able to house my rules in a nifty folder and plastic sleeves, helps when you have a liking for chocolate coated peanuts.


Where would you be without the grid book to create your dungeon(s).  I wanted to be able to store and record my dungeons I created.  Very cheap AUS$1.60, so I can record 48 dungeons in total before moving on to the next one.

So for those who are reading this for the first time and have not seen my amateur video production, you can find the link to the lavish production below!

The Hon. John
Posted by John McDonnell at 4:25 PM